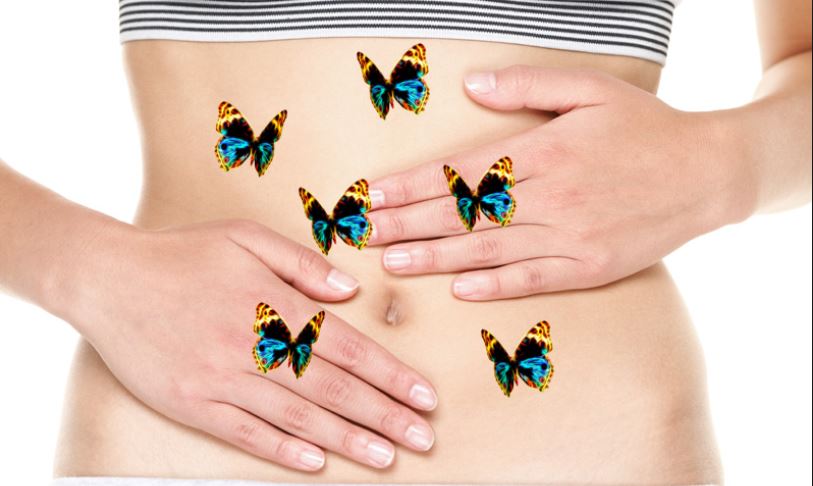 An unusual feeling in the stomach is always not welcome. Abdominal upsets, pain or cramps in both men and women are in most cases a sign of an underlying problem.

In women, it can be a sign of pregnancy, menstrual period or something else. In men, stomach upstets and flutters might be something far from the causes in women.

In some cases, stomach fluttering can be accompanied by flushed skin and an attack of sweat. Here are the meanings, causes, and symptoms of the fluttering.

Most cases of stomach flutters are short lived. Most will disappear after some time whereas others may recur from time to time.  When the twitches and jerks persist for more than a day, finding the underlying cause may be required.

Understanding the underlying cause makes it easier for you to stop, control, treat and prevent them from occurring in the future. Possible causes might include the following:

Stomach spasms in the abdominal area can be a sign of Crohn’s disease. This is an inflammatory bowel disease that causes inflammation of the digestive tract. The inflammation can cause:

If untreated, the inflammation may spread deep into the layer of the affected bowel tissue, the condition according to mayo clinic can be both painful and deliberating and could lead to life-threatening complications.

Starvation is also a possible cause of the butterfly feeling in stomach. Normally your stomach secretes enzymes and juices that aid in the digestion of foods.

When starving as a result of not eating anything, the juices and enzymes secreted by the stomach may cause harm to the walls and lining of your stomach.

Fluttering in stomach is a common symptom of anxiety or a panic attack.  The strange feeling can occur before eating, immediately after eating or some hours after eating.

When anxiety is the cause, it can be described as nervous stomach.

Anxiety, emotional stress, and fear are the leading causes of  the jumpy feeling in the stomach. The feeling is often how your body responds to fear caused by the release of hormones adrenaline and cortisol.

Apart for the hormones, the butterflies feeling in the stomach can be attributed to decreased blood circulation and the secretion of stomach acid in response to fear or being anxious.

Hot flashes in stomach is a common symptom in around 75% of premenopausal women. During this time, your upper body may flush red causing you to break out into a sweat while experiencing flicker of anxiety in the stomach.

To control the flushes, medical experts recommend you cut down on spicy foods, alcohol and excess coffee. You are also required to exercise regularly to prevent the flashes and manage anxiety. In severe cases, hormonal therapy and alternative medicine may be prescribed.

According to the Journal of the American College of Nutrition, magnesium deficiency affects at least 68% of United States population.

Magnesium deficiency has been tied to innumerable medical conditions including insomnia, morning sickness to muscle spasm. Magnesium has a lot of biological functions in the body, its deficiency, therefore, affects a lot of your body function.

Known symptoms of magnesium deficiency will include the following:

It is the irritation of the vagus nerve that causes palpitation or fluttering in heart and the stomach.

Though common in females, fluttering can also occur in men. Apart from the already mentioned causes, other will include:

Lots of gasses are produced during digestion. Increased levels of these gases and acid in the digestive system can result in stimulation of the abdominal muscles.  It is this stimulation that may cause fluttering in lower abdomen.

In women, the nervous stomach can be mistaken for early fetal movements. In such cases, it can be difficult to tell the two apart. If however the fluttering is accompanied by flatulence or belching, then the most likely cause might be intestinal gas.

To prevent this, avoid junk or spicy foods. Drink plenty of water to remain hydrated and also increase your physical activity to enhance proper digestion.

Viral and bacterial infections of the gastrointestinal tract can also be the underlying cause of the fluttering in stomach. These infections can result from eating raw or contaminated food or water.

When the cause is an infection, other symptoms will include chronic diarrhea, vomiting, abdominal cramps, bloating, and decreased appetite. Some especially children might have bloody stool and high fever

Butterflies feeling in stomach and abdomen is common among pregnant women.  In this case, the movements of the fetus are often responsible for the fluttering.

The flutters in the stomach during this period are called quickening.

Fluttering during pregnancy will often begin as early as 13 weeks into the pregnancy. This can occur when the fetus reacts to external noises or due to hiccups.

Fluctuation in hormones especially estrogen. This may cause hot flashes confined to the head, neck, and chest.

This feeling is frequent during the second and third trimesters.

When in the lower abdomen

In lower abdomen, the fluttering can be felt as a twitching sensation in areas underneath the belly button. Some people describe it as an irregular heartbeat, it may not hurt but it feels kind of weird to have.

Those who have experienced it in the lower abdomen say it feels like a palpitation occurring in the stomach, in some people, it can be more intense than a palpitation. A common cause of this kind of fluttering is said to be muscle spasms.

This is common during pregnancy, but If you are not pregnant, the underlying it might be caused by wind, gas or an abnormal bowel condition. Check with your health care provider if the symptom persists for more than a day or two.

In the upper stomach

Flutters in the lower and upper stomach can also be caused by bowel disorders. Common such disorder is spastic colon another name for irritable bowel syndrome. These disorders are characterized by increased contraction of the muscle of the large and small intestines.

The feeling is often nothing serious.  These contractions are referred to as spasms. Other symptoms will include:

The severity and cause of bowel disorders vary in different individuals. Treating the disorder involves relieving the symptoms, this will involve dietary changes, controlling your emotional stress and increasing physical exercise.

It is common for women to experience some flutters just before period. Most of the symptoms shown during this time can be attributed to hormonal changes and fluctuations caused by anxiety and emotional stress.

When stressed out, your body releases stress hormones, the central nervous system is stimulated by these hormones which result in fluttering of the abdominal muscles. You are also likely to experience the following symptoms:

Feeling it in the left side of stomach

Twitching of the abdominal muscles is very common and could be the underlying cause of fluttering in right or left side of stomach. The condition can occur due to a number of reasons which include the following:

a) Hyperactivity of the central nervous system

People with conditions such as Attention-deficit hyperactivity disorder (ADHD) may experience these kinds of symptoms. ADHD is a condition in which a person has an unusually high activity level and a short attention span.

Fluttering in left side of stomach can also occur as a result of muscle fatigue. In such cases, you are also likely to experience muscle weakness and lack of energy.

c) Imbalance of the electrolytes

For optimal functioning of the body, even balance of electrolytes needs to be maintained. Fluttering in lower, upper, right or left side of abdomen can result from an imbalance of one of the electrolytes (potassium, magnesium or sodium)

In cases of an electrolyte imbalance, you are likely to experience the following symptoms:

Not all cases of a nervous stomach are as a result of a sign of being pregnant. It is not uncommon to have fluttering feeling like a baby kicking, this is mostly on the left side of abdomen. The pain can be worsened when one coughs or sneezes.

Most of the people with this symptom describe it as not being painful. If no other symptoms are not shown, then we would recommend you take a blood test to confirm for sure that you are not pregnant.

Most healthcare providers describe this as a sympathy pregnancy where your body reacts to suggestions or unconscious wants.

Other possible causes can include muscles spasm, fatigue or excessive gas in the stomach. Regardless of what the underlying cause of the fluttering is, we recommend you visit your health care provider if it persists for more than two days.

How to stop it

As said most case of stomach flutters are temporary and subsides on its own without treatment. If that happens, there is no need for treatment.

This includes in cases such as pregnancy. Women have to mentally prepare, given that it is normal for the kicks and movements of the baby to increase as the pregnancy continues to grow.

When it is caused by anxiety or fear, then stopping or relieving the shakes may involve finding a way to reduce anxiety. Some important steps in such cases include yoga, meditation and anxiety medication.

Generally, you will need to stick to a healthy diet that does not produce gas or cause indigestion.  Cut your consumption of products containing caffeine such as a lot of tea and coffee.