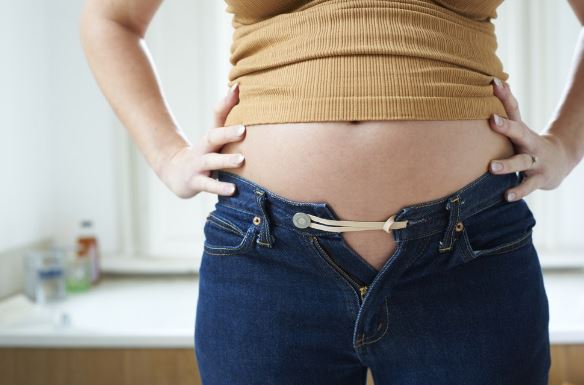 Progesterone is a hormone of gestation. It increases gradually after 1 week of ovulation, preparing your body for conception. Here’s what happens:

Abdominal gas may be accompanied by mild cramping, backaches and sometimes diarrhea in the first week of conception.  These are just some of the very early signs of pregnancy before missed period.

Is bloating or gas an early sign of pregnancy?

One of the very early signs of pregnancy in the first week is bloating. Even though it can be hard for many women to distinguish early pregnancy bloating and period bloating, most of them find it normal to be bloated during these times.

But what causes gas after conception? Is being bloated before period a sign of pregnancy? Not always, but if accompanied by other pregnancy symptoms, it is likely to be a sign that will be followed by a positive pregnancy test.

High levels of progesterone after ovulation reduce contractions in the gut leading to bloating and accumulation of gas.

Bloating and gas after ovulation

Dr. Carrie Smith, a professor of Obstetrics and Gynecology at Rush University says “Before menopause, for most women, bloating is a monthly occurrence and follows the pattern.”

The luteal phase of the menstrual cycle which falls after ovulation usually lasts almost two weeks. It is during this period that the abdomen lines itself for a possible pregnancy hence a lot hormonal changes occur.

Just immediately after ovulation, a hormone called estrogen remains relatively high paving way for progesterone which kicks in during the second week.

Research shows that when the hormone estrogen is high, most women retain water which in turn causes equal bloat. Progesterone causes slow movement of the food in the digestive tract resulting into bloating, gas and finally constipation.

Symptoms of abdominal bloating after implantation

Most common signs of boating right after implantation has occurred include the following:

If caused by implantation, gas or bloating sign of pregnancy may be accompanied by other symptoms such as a light pink discharge before menstruation, mood swings, lightheadedness and mild cramping.

What causes bloating and gas in the first two weeks of pregnancy?

The cause of bloating in early pregnancy is the increased levels of hormone progesterone. This hormone causes smooth muscles to relax.

For pregnancy to carry on, it is crucial that you have this hormone in place until childbirth. Progesterone triggers gas, burping and bloating since it causes smooth muscles including those of the digestive tract to weaken.

Other possible causes of bloating

While bloating is a common symptom of pregnancy in the first week to two, there is a chance your symptoms are caused by something else. Here are other reasons for stomach gas after implantation.

Also, gluten, which is a protein found in wheat, often brings about abundance in stomach gas and flatulence.

If your bloating is severe and lasts more than 3 days, see a doctor. The gas may not be a pregnancy sign or symptom in the first week or two weeks. Rather, it could be an indication of another illness.

How to relieve stomach gas in early pregnancy

Bloating is normal in early and throughout pregnancy because of the slowed digestion mechanisms. However here are tips to get relieve you from bloating.

Move around and take part in light exercises like rope skipping or walking. Exercise during this period will tone down your digestive tract muscles and help you eliminate gas. Walking at least 30 minutes daily will do you good.

It is important to cut down on other foods known to contain gas such as cabbage, onions, fried foods and sugary foods. You can always find alternatives to such foods and stay healthy all the way.

Foods to avoid when having stomach gas

Some foods are known to cause or increase gas once ingested, here are just but a few common ones.

Home remedies to get rid of bloating fast

You can easily get rid of gas at home by using specific solutions right from your kitchen. Here are some:

Mint contains menthol which has an antispasmodic effect enabling it to cause relaxation of the smooth muscles allowing you to pass gas quickly.

Likewise, it calms down the nerves to relieve abdominal tension. Peppermint goes a long way in mitigating and stirring stomach bloating. Add natural paper mint to a cup of hot water and drink once warm twice daily to treat gas and bloating. It is better if no sugar is added to this remedy.

A chemical compound found in ginger called gingerols is essential in unwinding the digestive tract and alleviate any symptoms.

Ginger teas made directly out the root works much better by dislodging gas in no time.Greate at least two medium sized crisps of ginger root and add to hot water with honey and lemon. Drink the mixture once warm, at least twice daily preferably after meals, to help you eliminate bloating.

Coriander is an excellent remedy for treating stomach upsets especially when it comes to burning sensations gas and treating indigestion.

In extreme cases, you are advised to take as much of this solution as possible.

Fennel seeds which are widely known to treat heartburn also set your stomach in place and help get rid of blazing sensations of gas and reflux.

Add a table spoon of fennel seed powder into a cup of hot, drink once warm. The oil contained in fennel seeds is essential in controlling flatulence.

It is true that a glass of lemon water each morning keeps your doctor away. Lemon has great properties, when taken in warm water it helps facilitate your gas torment by acting on the Hydrochloric acid in the stomach.

Lemon also helps flush out toxins that might be building up in the digestive tract to cause bloating.

Alternatively, you can add a table spoon of cinnamon into a glass of milk together will honey, drink warm.

Various treatments such as the ones below will help alleviate severe bloating: