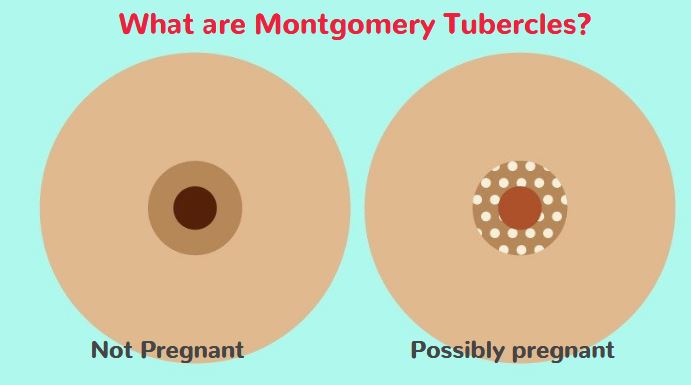 Noticing unusual bumps and lumps around the breast and areola area can worry any woman. There are many changes that take place in your body throughout your menstrual cycle.

During pregnancy as well, you may observe changes to your breasts and areola. Mild itching, swelling and small bumps around nipples may be some of these changes.

Those small lumps are called montgomery tubercles. They are the small bumps around your nipples. At times, they may appear without reason. They are a normal part of the menstrual cycle and may sometimes be an early sign of pregnancy.

What are Montgomery’s tubercles?

The nipple is surrounded by glands called the areolar or Montgomery’s glands.

These glands are sebaceous in nature meaning that they have the role of producing lubricants and antiseptics for the nipple and the surrounding area.

The bumps around nipples or areolas are similar to the ones found on the scalp. See pictures and image illustrations on the page.

While they mostly appear on the areola (the area surrounding the nipple), these little bumps may also appear on the nipple itself. They are not painful in any way and will become more pronounced if you stimulate the nipple or are pregnant. You may have between 2 to 28 of these bumps on each nipple.

While the glands are always present, the emergence of swollen Montgomery tubercles can be triggered by many different processes in the body.

The causes of swollen bumps around nipples may include pregnancy, stress and others. The swelling of the Montgomery glands is as a result of hormones just like many other bodily processes.

The complete list of the causes of Montgomery bumps includes:

Most women will first observe Montgomery’s tubercles when they get pregnant even before they miss their period. Besides the pregnancy test, bumps around nipples are the other major early sign of pregnancy in the first weeks.

This sign will be more valid if you observe a darkening of the areola. This is because it will be a sign that the breasts are in the early stages of producing milk. If you notice the size of the areola (and the breasts in general) increasing and becoming sore, then you are most definitely pregnant.

To further confirm if you are pregnant, there are other obvious signs of a pregnancy which, when combined with the Montgomery tubercles, are irrefutable. They include;

A few days after you have conceived, you may notice that you have tender, swollen and sometimes painful breasts. This is also another major sign of a pregnancy that is almost always a sure one. These signs will be accompanied by the tubercles all due to the rise in the levels of the hormones progesterone and estrogen.

Occasional spotting several days to your next period coupled with some pain in the abdomen is a sign that you could be pregnant. This would be the signs of the implantation process which is the attachment of the fertilized egg to the walls of the uterus where it will develop into a baby for the next nine months.

Due to the body preparing itself for the developing pregnancy, the uterine wall will not be shed as the case is if you are not pregnant. If you miss your period and notice the tubercles around your nipples, go for a pregnancy test right away.

Due to the excessive acid in the stomach, the stretched uterine muscles and a heightened sense of smell once you become pregnant, you are likely to experience morning sickness. Combined with Montgomery bumps, these are strong signs of a pregnancy.

Due to the hormonal changes that you will experience when pregnant, you may notice that you overwhelmingly like some foods while disliking others. While you may experience these changes when pregnant, it is not always a sign of a pregnancy since changes in appetite are normal.

One way the body prepares itself for a pregnancy is to retain nutrients and water. This increased water weight gain, followed by the exertion of pressure on the bladder by the bulging uterus, makes trips to the bathroom more frequent.

If you have these areola bumps and have frequent urination, a pregnancy should be on top of your list of the suspected causes.

In the first trimester of your pregnancy, your body will focus on building the placenta and the initial parts of the body. This placenta is what will nourish your fetus from a few cells to a fully grown baby.

Owing to the size and structure of the placenta, it requires a lot of energy and resources from the body. Also, at this stage, the fetus is dividing into many different cells at a very fast rate. Both of these processes will lead to a lot of fatigue.

Other possible signs of pregnancy other than sore nipples include diarrhea and constipation.

When the first trimester is over, the fatigue will go away as the placenta would be fully formed and the cell division in the fetus would have slowed down. If the fatigue continues into the second semester (or it increases), seek the advice of a doctor.

When do they appear in pregnancy?

If you are pregnant, raised bumps may appear before or after the missed period. It all depends on how sensitive to the hormones one is.

As soon as you experience implantation cramps and spotting, you may see the bumps right away. In other times, you may not see the swelling until after you have missed your period.

While most women assume that these bumps are associated with pregnancies, there are other times when you may see them when you are not pregnant.

It is not rare to experience areola bumps and have a negative pregnancy test. In such a case, the other causes of these breast swellings come into play. They include:

Stress is bound to alter a lot of processes in the body including inducing undesirable hormonal changes. People have different bodily expressions of stress with some exhibiting increases in hormones while others have the opposite effect.

In the case that your stress induces the production of the hormones that excite the nipples and the Montgomery glands, you will see the tubercles whenever you are stressed.

Although there are ways to do away with the Montgomery bumps no matter their cause, you need to treat the underlying cause in this case stress.

Other signs of stress that may help you pinpoint the cause of the symptom are:

You may expect that the Montgomery glands will only appear when the body is undergoing a certain process when it is not the case.

Hormonal imbalances may also lead to the production of progesterone and estrogen hormones when no bodily processes are in need of them. You will thus have the tubercles due to a hormonal imbalance.

Other signs of a hormonal imbalance that will help you identify the cause of the Montgomery’s tubercles include:

Cancer of the breast affects a good number of women around the world. Among its symptoms is a discharge with some blood from the breast. If the lumps appear and they have a water or bloody discharge in them, it could be a sign of breast cancer.

Other signs of breast cancer include;

Some physical changes in the body can also lead to bumps around the areola. Such changes include;

In most cases, the Montgomery bumps will go away once the physical cause has gone away.

How to get rid of bumps around nipples

While the Montgomery bumps around nipples are naturally expected to go away on their own, some may be unattractive and need to be removed. Here’s how to get rid of Montgomery tubercles with surgery and home remedies.

A normal excision will be performed on the areola bumps that are few and widely spread on the areola area of the breast. If you have about two tubercle or bumps and need them removed surgically, this is the best option. It is a type of cosmetic surgery that should not leave much of a scar on the breast.

The doughnut shaped excision is used when you have many  big Montgomery tubercles around the nipples and you need them removed. In this type of surgery, a wholesome elimination of any growths around the breasts is carried out.

Also a type of cosmetic surgery, the doughnut shaped excision will leave a minor scar around the nipple.

When at home, there are several procedures you can use to do away with the tubercles or reduce their sizes. Stop using the remedies if your nipples become dry and start cracking.

Using these remedies is easy since try can be easily found in shops. If you observe any side effects, ensure you consult your doctor about it.