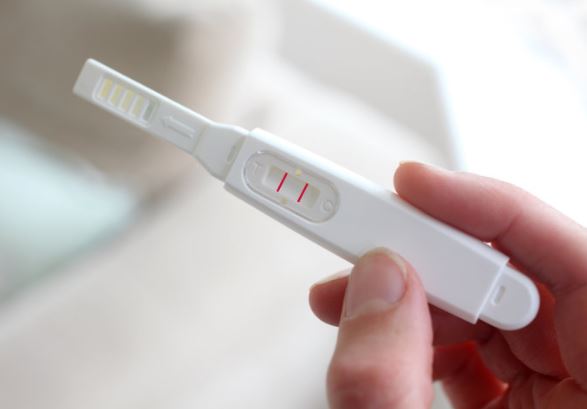 You are anticipating a baby, the pregnancy test is positive and yet, a few days or weeks after the test, you receive your period! This is what is called a chemical pregnancy and it is an early form of a miscarriage.

While you may think you are having your period, the bleeding may last for a little longer than your normal period.

You should definitely worry and see your doctor as soon as possible.

What is a chemical pregnancy?

A chemical pregnancy is the loss of a pregnancy in its early developmental stages. It is a form of miscarriage which occurs before the fetus is formed.

In these early stages of the pregnancy, the sperm would have just merged with the egg to form an embryo. This embryo makes the human chorionic gonadotropin (hCG) hormone which is the one that determines whether a pregnancy test is positive or not.

This means that it will occur after you have had a positive pregnancy test.

However, it would be too early to detect a fetus using an ultrasound machine when the pregnancy occurs.

Chemical pregnancies are quite common given that they are responsible for between 50 to 75 percent of all the reported miscarriages.

When does it occur?

A chemical pregnancy occurs around the first month of the pregnancy. This means that, when you take a pregnancy test that has a positive result but then experience bleeding and cramps similar to a period within a few days or weeks, it could be an early miscarriage.

You should know that it will only be chemical if you had a positive pregnancy test result. Otherwise, if the result was negative, it would just be your period and nothing more.

The pregnancy test should also have been performed at the right time which is a week after the day you expected your period.

The actual cause of chemical pregnancies is not known. This is because they occur too early on in the development of the embryo to pinpoint a specific cause. However, there are a few causes that could lead to such a condition. They include;

Diseases such as Chlamydia and syphilis have far-reaching effects on the reproductive system and could easily cause the loss of your pregnancy.

2. Implantation outside the uterus

After the egg has been fertilized by the sperm in the fallopian tubes, it should ideally move and attach itself inside the walls of the uterus. The uterus would have thickened enough to allow for its attachment and eventual development of a link between the embryo and the mother’s body.

This, however, is not always the case given that implantation can occur anywhere else besides the uterus. The most common location is the fallopian tubes in which case it would be referred to as an ectopic pregnancy.

Due to the fact that none of the other places are prepared to develop an embryo besides the uterus, you are bound to lose the developing baby as a chemical pregnancy.

At times, the uterus may not have thickened enough to allow for the implantation of the fertilized egg. The embryo would thus lack a position to attach itself and simply flow out of the body.

A pregnancy is made possible largely due to the presence and absence of specific hormones. If one or several of these hormones is either lacking, is in lower amounts than needed, or is too much, the pregnancy could be lost.

In the first place, the reason it is called so is because it occurs when the pregnancy is in its early stages whereby it is largely a mass of cells whose development is determined by chemical processes.

While the whole pregnancy will be maintained by chemicals such as hormones, these chemicals play very important roles earlier on.

When you have clotting disorders such as Hemophilia A and B, Factor II, V, VII, X, or XII deficiencies and von Willebrand’s disease, you are at a higher risk of having a this type of pregnancy. These disorders will make the process of formation of the fetus chaotic and likely to be unsuccessful.

If you are age 35 and above, you are at a higher risk than when you are younger. This is because, as you grow older, the body will tend to be more delicate hence highly responsive to anomalies.

While the sperm may have been able to fertilize the egg to form an embryo, there could be issues with either of them that may lead to the failure of the pregnancy.

For example, the sperm or egg may be of a poor quality in that they do not have the right combination of DNA elements or have other defects.

This will make it hard for the embryo to develop beyond the few initial stages.

In some cases, you may never see the symptoms and signs given its close resemblance to a normal period. Since it occurs within a few days or weeks of a period, you may be tempted to assume it is just a late period especially if you did not take a pregnancy test.

Among the symptoms include:

Although bleeding after a positive pregnancy test is a sign you should worry about, it is not always the case since bleeding when pregnant is a common occurrence.

However, you can differentiate between normal bleeding and a chemical pregnancy bleeding by the amount of the flow you experience. The bleeding from is quite heavy and lasts for long.

It is also notable that a chemical pregnancy does not cause the common symptoms of a pregnancy since it is too early in the pregnancy to develop nausea, vomiting, food cravings and other such signs.

How long does bleeding last?

The bleeding from a chemical pregnancy is very much similar to a period in terms of the color and consistency of the flow. It will have a pink to brown color and will flow for about 5 days.

The duration of the bleeding is the major difference between a period and a chemical pregnancy. The flow will last for an average of five or six days while a period flows for about four days.

The other difference is that you could see some tissue from the vagina when having. This means that, essentially the bleeding is heavier than a period.

The flow may or may not be accompanied by cramps.

The levels of the HCG (human chorionic gonadotropin) hormone will be rise when the embryo is formed after fertilization because the cells in the uterus are what produces the HCG hormone. This hormone is meant to nourish the embryo as it undergoes cell division at a high rate.

The HCG hormone is what is used to determine whether you are pregnant or not. Its presence or absence is determined by a pregnancy test kit if you are in suspicion of a pregnancy.

It will drop in amount before leveling off for the rest of the pregnancy.

When you get pregnant, the level of the HCG hormone will rise until it becomes detectable in a pregnancy test. However, if you lose the pregnancy such as during a miscarriage or a chemical pregnancy, its level will drop consistently until you have none of it.

For a chemical expectancy, you will have a positive pregnancy test owing to the presence of the HCG hormone.

When the bleeding occurs to signify the loss of the pregnancy, a pregnancy test taken a few days later will yield a negative result since the HCG hormone will be absent.

Are you more fertile afterwards?

Afterwards, most women will become skeptical of getting pregnant again owing to the trauma caused by the loss of the pregnancy. However, there is good news for you since a lot of women have apparently become more fertile after a chemical pregnancy.

Although there is no scientific backing of this assertion, a good number of women have had multiple births (twins, triplets and so on) in the pregnancies after the experience or miscarriage.

Also, unlike what you may believe, getting pregnant afterwards can occur as soon as the very next month or menstrual cycle.

It does not in any way mean that losing your pregnancy will occur again since a chemical pregnancy or miscarriage is a rare event to occur.

Even when you have lost two pregnancies in a row, you can have another one provided the cause has been identified.

It is also recommended to wait for a month to pass or your menstrual cycles to be consistent before trying to conceive again as you could easily get frustrated if you do it immediately.

You are expected to resume your normal menstrual cycle the month after. You should thus have ovulation in the second month after the events. It is then that you can try getting pregnant again.

In Vitro Fertilization (IVF) is a type of assisted pregnancy in which an egg is fertilized with a sperm in a Petri dish then transferred to the womb.

From here, it can grow into a baby in the next nine months. You may need IVF if you have the following conditions;

While a very successful method of getting a baby, it is not always the case since the body may reject the embryo inserted into the uterus leading to a chemical pregnancy.

There are a lot of cases where the In Vitro Fertilization method failed simply because the embryo did not attach itself or failed to develop beyond the initial stages.

To confirm whether you are pregnant or not, a blood test is carried out around the 9th and 14th day after the IVF procedure. Even after this test has shown that the procedure was a successful one and you are pregnant, you could still lose the pregnancy due to the reasons explained above.

The occurrence is also quite common when it comes to assisted pregnancy methods such as IVF and IUI. Again, it occurs simply because a given stage or chemical required for the development of the embryo into a fetus did not occur or become available as needed.

However, when it occurs, it means that there is an underlying problem which needs to be checked and possibly rectified.

Some of the main causes of a chemical pregnancy that either reoccurs or occurs often include;

Duration: How long does it last?

It can take up to six weeks before you see any of its signs such as bleeding or cramping. While you could lose the pregnancy as early as two weeks or a week after conception, others may have it for up to a month and a half before they lose it.

In either case, the same symptoms will be observed (whether you have the chemical pregnancy after a week or six weeks).

Since it is basically a miscarriage, it has the very same symptoms and is the loss of a pregnancy. While the chemical pregnancy occurs when the pregnancy is too early to notice a fetus in the womb, it is still a child and the psychological toll is just as heavy on the would-be mother.

However, the main difference to a miscarriage is the time they occur. A chemical pregnancy will occur within the first few weeks of the pregnancy up to the sixth week and thereabouts.

On the other hand, a miscarriage will occur between the 7th and the 12th week of the pregnancy.