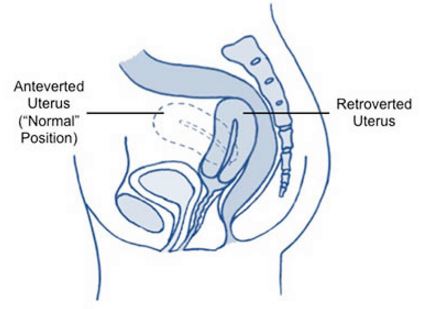 What is a tilted or retroverted uterus? Is it harder to get pregnant with a tilted uterus? Here are pictures, symptoms, risk factors and if there are any exercises that can help you fix a tipped or retroflexed uterus.

A tilted uterus is very common given that it affects about twenty percent of women. That means that 1 in every 5 women may be affected by a retroflexed uterus during their lifetime.

What is a tilted uterus?

A normal uterus is usually positioned in a straight and vertical position. However, when it is tilted, it will be positioned towards the back of the pelvis. While the phrase ’tilted uterus’ is the most common one, other terms that mean the same condition include:

All these phrases refer to the same thing and they may be used interchangeably in this article.

What does a tipped uterus look like on ultrasound? Here are pictures and images to help you identify this condition.

What causes a tilted uterus?

There are several causes of a tilted uterus some of which are a result of a sickness while others are due to natural causes. These causes include;

Having one or several of these conditions can lead to a tipped uterus.

Diagnosis of a tilted uterus

To diagnose a tilted uterus, you need to have a pelvic examination done, an internal ultrasound or use magnetic resonance imaging (MRI). Both of these methods are accurate in determining the position of your pelvis if done correctly. They are also easy to carry out in terms of the time and money that goes into them.

Symptoms of a retroverted uterus (tilted back)

When you have a retroverted uterus, there are some symptoms which might serve as a pointer to this condition. Some of the most common symptoms of a tilted uterus include:

What is the risk of miscarriage with a retroverted uterus?

A tilted uterus is expected to correct itself during pregnancy if it is of the normal type. In fact, few cases of a tilted uterus have been known to lead to a miscarriage.

It should be known that an incarcerated uterus is very rare as it only occurs in 1 out of 3000 women. It will rarely lead to a miscarriage in the first and third trimester.

See also: What is the normal uterine size?

Is it harder to get pregnant with a tilted uterus?

How to get pregnant with a tilted uterus

While a tipped uterus is less likely to reduce your chances of getting pregnant, there are certain positions that can help you increase the likelihood of conceiving if you have a tilted uterus.

To increase the chances of conceiving while you have a tilted uterus, you only need to find sex positions that will facilitate the movement of sperm towards the fallopian tubes. These positions entail having the back lower than the waist when having sex. Also, it is advisable to lie still for about half an hour to allow the sperms enough time to move in the reproductive system.

Does a tilted uterus cause back pain?

Back problems in early pregnancy can be a sign of a tilted uterus in a good number of women. The first and partly the second trimesters can be dogged by back pain since by then the retroflexed uterus would have not reverted back to its natural position.

However, if the back pain persists in the second trimester, it can be due to an incarcerated uterus which means that the initially tilted uterus would have failed to go back to its natural position.

If you experience back pain and you do not see any other signs of a tilted uterus, you need not worry about it. The best advice in such a case will be seeing a doctor for checkup.

A uterus might tilt in various ways all of which might be problematic when it comes to getting pregnant or preventing a pregnancy. While you could just take birth control pills, the use of IUD devices has a higher success rate when it comes to preventing pregnancies. Given that the IUD device is inserted in the uterus, most women wonder how effective the IUD can be in a tilted uterus.

The answer to this question is that the use of an IUD is still effective in the prevention of a pregnancy whether you are considering a copper or hormonal IUD. It all depends on the skills of your doctor in doing this. Most doctors who insert these devices have enough experience to insert them even in a uterus that is tilted.

Another question most women have about IUD devices and a tipped uterus is whether it is more painful having the device inserted compared to when one has a normally positioned uterus. The answer to that is that, if done right, there will be no difference in pain between the two cases.

In rare cases, however, there can occur a perforated uterus when the IUD is inserted wrongly with the uterus being tilted. This may occur if the doctor has not corrected the position of the uterus before inserting the IUD. It is also common among women who are breastfeeding.

To prevent cases of a perforated uterus, it is generally recommended that you wait for at least 6 weeks after an abortion or a delivery before inserting be IUD.

How to fix a tilted uterus

Although you can expect the uterus to go back to its natural position during pregnancy, the discomfort you may feel at other times with a retroflexed uterus is enough to warrant a repositioning of the uterus. In most cases, effective treatment requires treating the underlying problem or else the tilting will recur.

There are several ways that can be done including;

Fertility massage focuses on bringing balance to the uterus and the pelvic region. It requires some skill to do it correctly although you can be trained to do it yourself. It has helped many women restore the natural position of the uterus.

Retroverted uterus exercises are in many ways similar to fertility massage as they are non-invasive ways of moving the uterus back to its original position. One of the most common exercises for a retroverted uterus is the “knee-chest” exercise.

While an effective exercise, it may not have good results when it comes to a tilted uterus caused by pelvic infections, fibroid tumors, and endometriosis.

Also called keyhole surgery, bandaid surgery, or minimally invasive surgery (MIS), laparoscopic surgery is a type of surgery which entails making incisions away from the location of the actual body part. In this way, you can have the tilted uterus corrected without operating the pelvic area in any meaningful way.

A pessary is a silicone or plastic device which is placed in the vagina to help in repositioning the uterus. A pessary is considered a temporary solution to the issue of a tilted uterus since the uterus will likely revert back to the tilted position once it is removed. This device may also cause vaginal infections if it is not taken good care of.