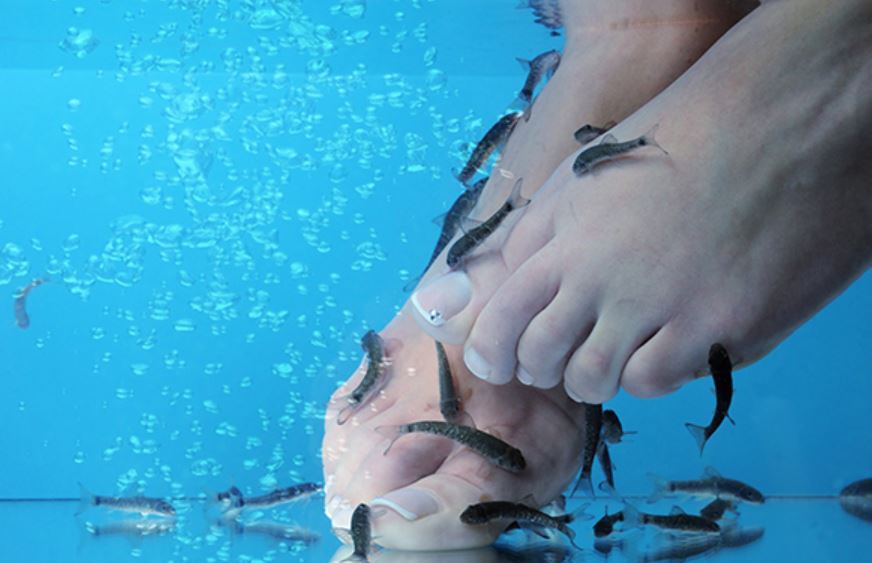 Getting a pedicure in a tub with fish has been a craze around the world. Pedicures entail applying nail color to your toenails and removing dead skin. The result is smooth feet free of calluses.

The standard procedure of removing calluses and dead skin on your heels and bottom of feet is done using a metal foot file or a pumice stone. However, some spas have resorted to using fish to provide what is called fish pedicure services.

What is a fish pedicure?

This type of spa pedicure is prepared by putting Gerra rufa fish in a tub. Other names include doctor fish, nibble fish, or Kangal fish.

A client puts their feet in it. The fish then nibble dead skin off the feet – a procedure usually done using a pumice stone.

With all the bans going on, it is highly unlikely that you will find a legal spa with this service near you.

These pedicures are believed to have healing abilities. Some with fungal infections, psoriasis and eczema on their feet believe taking a foot bath in such tanks can help heal these conditions. In general, here are the benefits of a fish spa to your feet.

Some of these advantages are not scientifically proven though. For example, your psoriasis may improve but may not get cured through spa therapy.

How it is done

At the spa, the exfoliation tub is prepared by cleaning and sanitizing it. Each customer’s tub is then filled with clean water and about 150 fish.

The client is then made to put their feet in the water. The fish then start to nibble dead skin off the legs and feet.

The reason behind this is that Garra rufa are believed to feed on dead scales off other fish in the sea. They such rather than bite off since they have no teeth.

The process may last between 15 minutes to 1 hour depending on the amount of dead skin on your feet. In some instances, the spa therapist may repeat the procedure to ensure all the calluses are removed and the client is left with a soft skin.

As soon as you dip your feet inside the tub or tank, expect them to start nibbling. You will feel ticklish. This feeling does not turn into an unpleasant one. Instead, it becomes relaxing as the fish pedicure goes on.

As soon as the treatment ends, your spa attendant will clean and rinse off your feet. The other regular steps of a pedicure will then follow.

Does the pedicure hurt? Since the animals have no teeth, they are merely sucking and nibbling off dead cells from your skin.

The experience is only ticklish and tingly, but nothing that is painful or hurts. If you bleed, then probably the kind of fish used is not the right one. Also, practice safety by ensuring you don’t have cuts and wounds on your legs and feet before visiting the spa.

How much does a fish pedicure cost?

The cost of a fish spa pedicure ranges from $45 to $120. This depends on the length of the therapy as well as other additional services you may be interested in.

The amount you will pay may eventually depend on what other services you may have requested. Foe example, shaping your toenails as well as applying polish can make the cost go higher than the estimates given above.

Before and after results

How does a pedicure in a fish spa compare to a traditional pedicure? Most traditional spas use a loofah or a pumice stone to exfoliate feet and get rid of dead skin.

Your feet are then massaged with warm oil and a moisturizing lotion applied. Sometimes, your toenails get shaped and polish applied.

However, when it comes to a pedicure done by fish, the initial part of the service differs greatly from the traditional one.

For a fish pedicure the before and after feeling may be the same as your usual foot therapy. However, the initial stage differs. Instead of a pumice stone sloughing off your calluses, fish nibble it off to give you soft feet with exposed new skin.

Although this service is popular, there are some dangers and cons that come with it. In October 2008, for example, fish pedicures were banned in Washington. The Washington DC Department of Licensing remarked that they did not feel the service hygienic enough.

With that in mind, what side effects can you expect from fish salons when things go wrong?

Other than these risks, there are further arguments discouraging the use of fish in salons and spas. There are concerns of animal cruelty. It is believed that the fish must be starved first for them to feed on the dead skin cells.

There are cases of Chinese Chinchin fish being confused with Garra rufa. The Chinchin species grows teeth with time and can bite, causing injuries and bleeding.

Where are the spas located?

A Google search can help you get the service near you. You have to search with your city in order to get spa listings with reviews of the service.

Other than that, we found a Doctor Fish Massage website listing where you can find sites across the United States where you can go for the service.