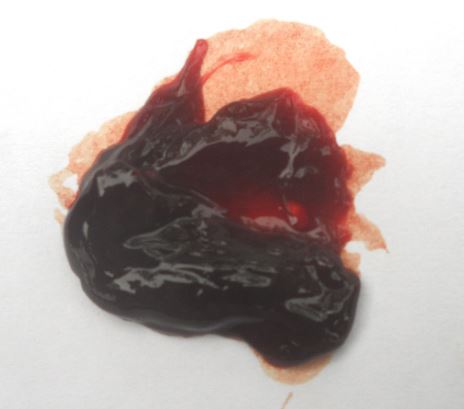 A small amount of clotting during menstruation is considered to be quite normal. The little lumps are merely a part of the menstruation process and should not worry you.

But how much is normal and when should you see a doctor?

When you start to pass clots bigger than the size of a golf ball, it is a serious concern that should be checked by your gynecologist.

In fact, in some women, the lumps may be large with white tissue and accompanied by cramps (abdominal pain). This may signify a miscarriage and should not be considered normal.

Below, you will find out what causes period clots, the signs to be on the lookout for, and how to stop such a heavy flow.

It is normal for to have clots in your menstrual bleeding? Naturally, most women routinely have small clots whenever they have their menses.

However, there are factors that normally determine whether this will occur or not. The factors include:

It is important to observe the duration of the clots as this will indicate a number of factors. If you are able to maintain normal blood flow without ever developing anemia, and in case these period clots do not last for more than the duration of the your normal monthly period, then they are deemed to be within acceptable limits.

If not, we advice you see a doctor for proper diagnosis and treatment to stop the heavy lumpy flow.

Why do I get blood clots during my period? In general, the cause relates to the anticoagulants breaking down the uterine wall to shed it off.

During menstruation, the thick lining of your uterus breaks away. Anticoagulants are released to break the thick blood before it is released.

Most women with a heavy period flow experience blood clots because the blood from the uterine lining is expelled faster than the anticoagulants can break it down. This results in blood clots during heavy period.

These are benign tumors that normally grow inside the uterus. However, just because they are benign does not imply that they are normally chill—even though there are cases of women with uterine fibroids who do not get any kind of negative symptoms from the fibroids. Common symptoms of fibroids include:

The pain that accompanies your clot-filled period is the result of your uterine wall cramping in order to expel the large blood clots in your period.

If you have experienced any or all the above symptoms, you will need to go for a uterine check-up. The doctor should be able to determine whether you are suffering from fibroids or not before discussing the treatment options that are available for you.

For such women, they will normally experience monthly periods that last for more than a week. In addition, the period could be characterized by a flow that is unusually heavy.

In case you notice that this flow starts around the time when you have started using a new type of birth control, then you should make sure that you talk with your gynecologist about it.

Between fifteen and twenty percent of all pregnancies often end up in a miscarriage before they reach the twentieth week.

The actual figures are quite high. In case you were not aware that you were in fact pregnant, and get a miscarriage during the initial weeks, clots will appear as though you are having a heavy flow.

Big clots are very common during a miscarriage. However, if you realize that you had the lumps during one month, but they were gone the next, you should not panic that you had a miscarriage, as it could simply mean that you are having a fluctuation in your monthly cycle.

Perimenopause is often associated with the appearance of excessive clots in the period flow. This is the stage that appears before the beginning of menopause.

When in this stage, your body will produce progesterone at varying levels. With this fluctuation, the estrogen levels will begin to rise to levels that would not have been recorded in the past. This then can lead to the development of thick endometrial tissue.

The endometrial tissue then leads to unusually heavy periods. Again, you should not panic just because you have reached the perimenopause stage. In case you notice that the symptom is unusually frequent or abnormal, make sure that you have a chat with your doctor.

Small lumps of blood during your period could also be clotting abnormalities. Certain hereditary diseases have been known to make one more prone to bleeding. Von Willebrand disease is an example.

Women with such a hereditary disease is likely to bruise very easily. Additionally, they could be prone to frequent bleeding e.g. bloody gum and nose bleeds, which in some cases may become prolonged.

The primary type of infection that can cause this kind of bleeding is the pelvic inflammatory disease. This infection affects the reproductive organs in women, and if it goes unnoticed, it can cause a lot of damage. However, the condition can be treated using antibiotics.

For you to find out what is causing the heavy flow accompanied by clots, you need to see your doctor. Most of these conditions are treatable provided that they get noticed early on. Detection can be done using an ultrasound or by conducting a physical exam.

There are miscarriages that often occur without warning, even though there are a few that are preceded by certain signs and symptoms.

According to the American College of Obstetricians and Gynecologists, miscarriages are defined as pregnancies that do not last for more than twenty weeks, with many occurring within the first thirteen weeks.

As such, it is important to know what you need to be checking for especially during the first few weeks of your pregnancy.

Early signs and symptoms of a miscarriage

Common signs and symptoms of an early miscarriage, which is also termed as a spontaneous abortion are:

Vaginal bleeding is the first symptom to occur during a miscarriage. It is normally seen in between fifteen to twenty percent of women who have a miscarriage during the first trimester. When it occurs, this kind of bleeding may be intermittent or constant.

The American Pregnancy Association states that bleeding is normal, and will occur in between twenty to thirty percent of pregnant women, and as such, it should not always be viewed as the loss of a pregnancy. But, you should notify your nurse or doctor if you notice this kind of bleeding:

It is important to keep in mind that brief vaginal bleeding may occur during the early days of implantation.

During the early gestation and implantation days, you may experience some mild abdominal pain. However, continuous or intermittent cramps may be an indication that the woman has had a miscarriage.

It is normal for pelvic pain or cramps to accompany vaginal bleeding, and it may be brought about by the uterine contractions. Pain intensity will normally vary, though it is essential to consider the possibility of a miscarriage in case you have any of the following:

Passage of mucus, tissue, or fluids

In case there exists the threat of a miscarriage, you could notice any of these symptoms:

Big clots can be worrying. If you pass blood clots during period that are bigger than a quarter or the size of a golf ball, then you are definitely experiencing heavy menstruation.

Non-cancerous growths on the uterus called leiomyoma, or fibroids can lead to  such big balls of blood to be passed out through your vagina. Here are pictures to help you identify the symptom.

Heavy bleeding with pain can be caused by very many factors. In many case, you will find that it has simply been brought about by the existence of a hormone imbalance or changes in your hormone levels e.g. when approaching menopause or after using certain methods of birth control.

However, there are times when it could be caused by a more serious health problem. These are some of the cause of heavy periods with lots of clots and pain.

Period blood that has white tissue in them is a problem commonly experienced by women who are taking hormonal medication e.g. birth control pills. In addition, there are drugs e.g. aspirin, which have also been seen to cause increased bleeding.

To-date, medical professionals have not been able to establish what causes this kind of bleeding in close to half of all the women who have this particular bleeding.

It is however, recommended that you consult your gynecologist in case you have this particular issue. The gynecologist will test you for a bleeding disorder to determine what could be the problem.

How to stop clots during period

Many women notice they are passing jelly like blood when they are menstruating. For many, the clots occur during their heavy bleeding days and hardly between periods.

It is normal as it means that the body is releasing anticoagulants that make it impossible for your period blood to begin clotting.

This flower is beneficial when it comes to treating a number of conditions associated with menstruation e.g. abdominal pain, heavy menstrual bleeding, and the discharge of clots.

All you need to do is to prepare a concoction by combining thirty grams of this flower with fifteen grams of saffron, before putting the mixture in your drinking water. It is recommended that you take this concoction at least three times a day, and to take it while it is still hot.

Mango bark remedy is one of the simplest to prepare. All you need to do is to take the mango and then blend it to get the extract. Take 10ml of this mango bark juice and combine it with at least 130ml of pure water. If you use this remedy, ensure that you take a single teaspoon of it at least once each hour.

It comes in handy when a woman is dealing with menstruation related pain. It comes highly recommended as it contains caffeic acid, which has been known to assist in reducing pain related symptoms.

Combining herbs is always a great way for a woman to deal with the pain that comes with menstrual bleeding. A regular intake of the herbal powder is recommended as it assists in easing excessive bleeding during your menstrual days.

It is capable of eliminating cramps and excessive bleeding when you are menstruating. Fenugreek seeds are readily available from online, health food, and eastern spice stores.

The oil that is extracted from these leaves has been known to assist in stopping heavy bleeding during your menstrual cycle. It is possible to completely get rid of heavy bleeding within a few months, but only if you take up to drinking this extract on a regular basis.

It is recommended that women affected by heavy bleeding take at least twenty drops of the oil each day for at least three weeks before they can start their next cycle.

Bamboo leaves and nodes have for years been used at home to help women and mothers deal with heavy menstrual flow. They assist in regulating the flow. All you have to do is take the leaves or the nodes and boil them in two cups of water. You should then make it a point of consuming a few sips each day.