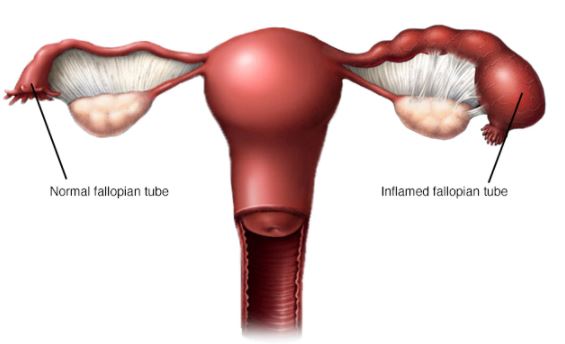 Pelvic Inflammatory disease is a common infection among women of childbearing age. Its onset depends on the causative agent, so does its treatment.

Mild cases can be easily treated by use of oral antibiotics while severe cases will require the involvement of other invasive medical procedures.

Pelvic Inflammatory Disease is an infection of a woman’s reproductive organs. It is usually a result of some sexually transmitted Infections such as Chlamydia and Gonorrhea.

PID is usually categorized into acute or chronic depending on the presenting symptoms and its onset. Pictures illustrating how PID occurs usually show inflammation and blockages of the fallopian tubes in severe cases.

PID may present with one or all of the following symptoms:

How do you get PID? You get PID when a bacterium enters the reproductive organs through the cervix.

When the cervix is infected, the bacteria can easily get into the uterus and fallopian tubes to cause damage. Pelvic inflammatory disease (PID) causes include:

Failure to treat the infection leads to its spread to the upper genital tract whereby it gets into the cervix and other organs. Chlamydia causes chronic PID while Gonorrhea leads to acute PID.

BV is as a result of bacteria imbalance in the vagina. There is a drop in the good (Lactobacillus) bacteria and increase in the bad (anaerobes) bacteria.

When this happens, the bad bacterium spreads to the uterus and other pelvic organs, and PID occurs as a result.

IUD insertion should be done after several tests and examinations to rule out STIs and PID. Inserting an IUD where there is an infection will cause spreading of the infection to the cervix.

IUD itself is not one the pelvic inflammatory disease (PID) causes. It only propels the micro-organisms upwards to the cervix.

Arriving at a pelvic inflammatory disease diagnosis is quite a process. These are the steps involved in diagnosing PID:

Your doctor will ask you various questions regarding your sexual behavior. It is advisable that you be honest while answering these questions because they form a base of correct diagnosis.

The questions mostly focus on:

Your doctor will feel for fevers by placing their hands on your forehead. You will then be required to lie on your back. While on your back the doctor will palpate your abdomen in a circular motion to determine the nature and location of the pain.

Uterine tenderness is one of the symptoms that your doctor will be interested in, to make a diagnosis of PID.

Laparoscopy is a surgical procedure in which a tiny, flexible tube with a lighted end is inserted through a small incision just below the navel. The procedure is done under some anesthesia so that you won’t feel any pain. Laparoscopy allows your doctor to view the internal organs, as well as take specimens for culture and sensitivity or microscopic studies if necessary.

You will be asked to lie on your back with your abdomen exposed. Your doctor will then apply a gel-like substance on the lower and mid part of the abdomen. A small hand-held device is placed on the abdomen on a circular motion to show internal organs on a computer screen. The procedure can diagnose any cause of pain such as inflammation.

These diagnostic measures are only taken into consideration when the symptoms are not improving with treatment. They can also be done when an ultrasound has shown a possible growth or an abscess that needs further evaluations.

A pregnancy test is done to rule out the incidence of tubal pregnancy. Also, several blood tests are done to look for signs of inflammation.

The blood tests check on the sedimentation rate, full cells count and C-reactive protein. Blood or urine culture can be used to check for infections.

Acute PID occurs suddenly and tends to be more severe, whereas chronic PID is a low-grade infection that may cause mild pain and in other lower backache.

Women with PID may present with various symptoms. However, these are the most common ones with the acute subtype:

Chronic PID, on the other hand, is accompanied by:

Complications of PID may take many years to develop. The resulting long-term effects are often painful and can cause permanent damage to the reproductive organs.

The longer the woman has untreated or undiagnosed PID, the more chances that these long-term effects may occur:

There is a greater chance that the body’s immune system will form a pus-filled mass around the infected tissue in the tubes and ovaries. In most cases, an abscess forms immediately after the infection begins.

while in other instances the abscess is a long-term effect of untreated PID.It can be very painful and take some time to heal fully. If not properly treated, it might become a malignant ulcer, causing more pain.

The fallopian tubes may be blocked as a result of a scar, adhesion or abscess formation. The blockages hinder the sperm from meeting with the ovum for fertilization.

The slippery mucus known as cilia may also be damaged. Cilium propels the fertilized egg to the uterus for implantation. All these factors make pregnancy impossible.

Also known as ectopic pregnancy, tubal pregnancy occurs when the damaged fallopian tubes hinder the fertilized egg from moving to the uterus for implantation. In that case, the embryo begins to grow in the tube.

The tube bursts when the embryo grows to a certain size since it cannot stretch like the uterus. This is a life-threatening condition to the mother, and chances of embryo survival are nil.

PID infection can spread to other parts of the body. Once the bacteria leave the pelvic cavity, it infects the abdomen and peritonitis occurs. All the organs surrounding the reproductive organs such as the bladder and bowel have high chances of being infected.

The spread of the infections is one of the long-term effects of PID that can hinder other organs from properly functioning, additionally making life unbearable. Spread of the bacteria in the bloodstream is very dangerous and fatal.

PID that lasts for months or years eventually lead to scarring. Adhesions and scars in the fallopian tubes and other pelvic organs lead to unending pain during menstruation and sexual intercourse.

Chronic pelvic pain is one of the common long-term effects of PID in women.

PID is treatable if diagnosed early and treatment schedule adhered to. However, it will not undo any damage such as scarring that has already occurred to the reproductive system. Treating PID is a process that must be adhered to avoid reinfection.

Treatment depends on the infectious agent and involves the use of antibiotic therapy. For most women, PID is often mild or moderate and is treatable with oral antibiotics. In severe cases parenteral and other oral therapies appear to be effective.

Follow-up is another important factor; it ensures that the patient is responding to outpatient treatment. Clinical symptoms ought to improve within 72 hours of treatment.

Re-evaluation is advised if recovery signs are not visible within that period. Other patients may also require further tests to rule out other health problems.

Counseling is also part of the treatment. It generally focuses on prevention of sexually transmitted infections and PID.This is because there is a high risk of re-infection even when partners have been treated.

Retesting for STIs is suggested three to six months after treatment. Testing for syphilis and Human Immunodeficiency Virus (HIV) should be done to rule out other related infections.

Natural treatments are also effective in treating and relieving symptoms of PID. Here are a few home remedies to try:

Turmeric contains an active ingredient known as curcumin, which has a powerful antibacterial as well as anti-inflammatory properties. These properties have illustrated efficiency in relieving symptoms related to PID as well as fight the infection.

This is another ancient natural treatment for PID.This compound is alkaline, thus reducing the acidity of the large intestine. This factor makes it a powerful tool in the elimination of infection-causing bacteria. Additionally, it helps reduce the body’s overall pH.

Constant sitz baths are an effective natural remedy in reducing symptoms of PID.It is advisable to use warm water to help relax the pelvic muscles.

Garlic is one of the most powerful treatments when it comes to PID treatment. It contains anti-bacterial compounds that help destroy harmful bacteria. It also helps balance the vaginal bacteria thus preventing recurrent infection.

This is another effective remedy. This herb contains anti-microbial, anti-inflammatory and immune-stimulant properties that help fight infection, ease symptoms and promote fast recovery.

The primary cause of PID is STIs. If you are sexually active, you can lower your risk of getting STI with the following steps:

Because a man does not need to ejaculate to infect you with an STI, condoms are the best way to prevent you from serum contact with your vagina.Other methods of birth control like combined pills, diaphragms, implants and shots will not protect you from STIs

Test when you have symptoms of STI or PID. Also, make sure you and your new partner get tested before engaging in sex

3. Have one sex partner

Being faithful to one sex partners can lower your risk for STIs. After being tested be faithful to each other, it means that you only have sex with the same partner.

Douching or excess cleaning of the vagina with chemical solutions depletes the good healthy bacteria that protect you from infections. Douching can also increase your risk of PID by pushing the bacteria to the upper genital tract.