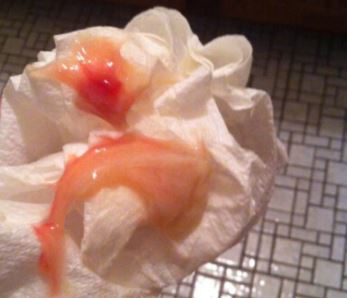 The healthy kind of cervical mucus ranges from clear to slightly white. At times, however, it may change to have a blood tinge or turn to a bright red or brown color in totality.

There are many reasons behind this type of discharge some of which may warrant a visit to the doctor.

Bright red blood can mix with the normal clear or white cervical mucus to create a blood-tinged cervical mucus. The reasons behind this kind of mucus include:

Both mental and physical stress have been known to lead to undesirable changes in the body such as vaginal spotting.

Having too many negative thoughts, losing or gaining weight drastically and even working out too heavily may lead to the same case.

Cancer of the endometrium is characterized by the discharge of a blood-tinged cervical mucus.

Both of these conditions are common when you tend towards menopause in your 40s onwards.

It should be known that most other types of cancers such as cancer of the vagina, ovaries, uterus, and cervix have the same symptom of causing blood-tinged cervical mucus.

When the hormones of the body are not in balance with each other, you are at risk of random and occasional bleeding from this imbalance.

This is often the case when you have a problem with the organs that produce and regulate a number of hormones in the body.

Even when these organs are operating in their optimal states, the changes in the amount of hormones in the body often cause some upsets which can be expressed as slight spotting or the observation of blood in the cervical mucus.

When you are using an intrauterine device as a birth control method, you may be vulnerable to occasional bleeding especially in the early stages of using the device. As it is a foreign body, it will be rejected by the body at first leading to the spotting.

When you are using a birth control pill, you may notice random bleeding in the form of breakthrough bleeding. This kind of bleeding occurs due to the influence of the pills on the hormones that control the menstrual cycle.

Unless the bleeding is consistent, you don’t have to worry about breakthrough bleeding since it stops after a while.

At times, when you are having an infection from a sexually transmitted disease, you are bound to release a bloody mucus from the vagina. The diseases may affect the ovaries, fallopian tubes, uterus, cervix and the vagina.

The most likely disease that leads to this kind of cervical mucus include:

If you have the blood tinge in the cervical mucus with the following signs, you need to see a doctor:

Most infections can be easily treated with over-the-counter medication and home remedies.

The causes of bleeding disorders include:

Among the most common types of bleeding disorders are:

You will know you have a bleeding disorder with the following conditions besides the bloody tinge in the cervical mucus:

Each of these signs needs to be addressed quickly once you notice them.

To prevent such a scenario, you need to only engage in sex when you have enough natural lubrication. If not, use a water-based lubricant to prevent any tears on the private parts.

In most cases, bleeding from sex is mild and takes a few minutes to hours to completely heal. If you always bleeding during sex or the bleeding takes too long to stop, you should see a doctor about it as it could be another disease.

Ovulation is the release of a mature egg from the ovarian cavity. It occurs midway of the menstrual cycle which places it at the 2nd week of the cycle for a 28-day menstrual cycle.

The release of the egg from the follicles in the ovary is the cause of the slight spotting and at times some cramps.

With ovulation, you will experience the cramps in the abdomen and on either side. The bleeding should not last for more than a day or two. Also, it should not be in large amounts.

Implantation is the process by which the fertilized egg gets attached to the wall of the uterus for growth into a baby. This process occurs after the mature egg has been fertilized by a sperm.

Implantation entails the burrowing of the egg into the wall of the uterus. With this process, you are likely to observe some bleeding. This is called implantation spotting and it is likely to occur for a few hours or up to a day at most.

This process occurs around the 3rd week from when you last had your period. That is about a week after ovulation.

When you are about to have your period then observe some blood in the cervical mucus, chances are that you are pregnant and what you are seeing is implantation bleeding.

Implantation bleeding will occur in the last week before your expected period. If you notice this kind of bleeding and your period does not appear within its range, you should take a pregnancy test a week after the expected period.

This kind of mucus will range in color from pink to light brown.

The appearance of blood in the cervical mucus in the few days after a period should not worry you as it would be the body’s way of getting rid of the remaining menses from the uterus.

Another reason for this phenomenon is the fact that hormones will be reverting back to the state they were in before the period set in. hormonal changes are often accompanied by spotting in some people.

Having blood streaks in your cervical mucus during ovulation is a normal occurrence which does not warrant a visit to the doctor.

The process of bursting the wall of the follicles is what causes some spotting and slight cramping in the abdomen.

At any time during your pregnancy, you are bound to notice occasional blood in your cervical mucus. The most likely time will be in early pregnancy.

First off, you may see the bloody cervical mucus during implantation which is the earliest sign of a pregnancy. Then, you will see the same mucus tinged with blood in the first trimester of the pregnancy as the placenta develops and joins with the uterus.

In the rest of the pregnancy, the same occasional bleeding is common up to the last few weeks of the pregnancy (week 36-40) when you will lose your mucus plug. The mucus plug often comes out as a gelatinous mass with a tinge of blood.