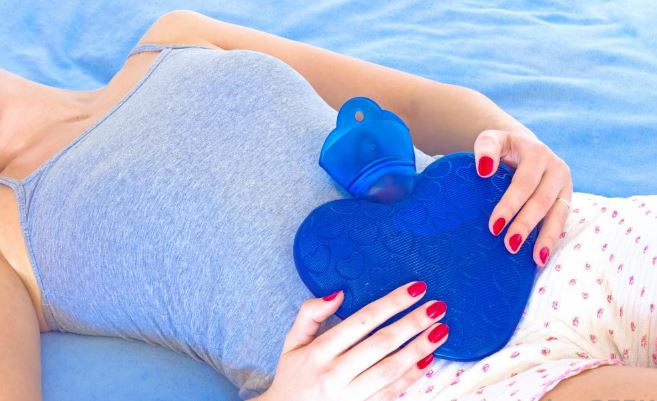 Why do I have cramps but no period? Sometimes, you may experience period-like pain or PMS symptoms but no menstruation.

This may be accompanied by a clear white discharge 2 days or a few days after a late or missed period. What does it mean? Does it mean you are pregnant? What if you get a negative pregnancy test?

Having PMS but no period can be due to many different reasons one of which is a pregnancy.

However, it does not always mean you are expectant. There are other reasons for such a symptom as well. Here are details on some of them.

Various birth control methods such as the pill and IUD (intrauterine contraceptive device) also have the side effect of causing pain similar to what you would feel during a period.

Keep in mind that these methods are meant to interrupt the natural flow of bodily processes hence occasional side effects are to be expected.

If you have an intrauterine contraceptive device inserted and have constant pain in the abdomen, you need to have it checked as it could have been inserted wrongly.

Also referred to as tied tubes or tubectomy, tubal ligation is a method of sterilization in which the fallopian tubes are severed and sealed or clamped and blocked with the aim of preventing the eggs from reaching the uterus. It is a permanent sterilization method which prevents pregnancy at all times.

If you have undergone the tubal ligation procedure, you are likely to have the post-tubal sterilization syndrome which affects a large number of patients. Among its signs include:

You need to have a close relationship with your doctor after undergoing tubal ligation surgery to avoid or deal with any complications.

Ovarian cancer is likely to cause pains similar to what you would feel in a period. Owing to the similarity of this pain to other diseases, it is hard pinpointing it.

The symptoms of this disease include:

The irritable bowel syndrome causes pain in the stomach coupled with bloating. Diarrhea or constipation or both are common with this condition.

The cramps come and may go after you pass stool. In most cases, the pains are more intense during your period. Other symptoms associated with this condition include:

After a traumatic event such as an accident or some cases of vaginal childbirth, the pelvic floor muscles may be damaged such that they experience occasional spasms. These spasms are common in the muscles that support the rectum, vagina, womb and the bladder.

These spasms cause intense pains in the abdomen and the groin. The other symptoms of this condition include:

Endometriosis occurs when the cells of the endometrium grow on other parts of the body leading to pain and some bleeding when the abdomen is disturbed.

The pain from endometriosis is similar to what you would normally experience in a period. The difference is that it would occur at any time, unlike a period whose timing is known. When you have sex, you are bound to make the pain more pronounced when you have endometriosis.

An ectopic pregnancy is one in which the fertilized egg attaches itself to other parts of the reproductive system rather than the uterus. The most common location for ectopic pregnancies is the fallopian tubes. It is a delicate and potentially dangerous situation which may harm the mother and the child.

The symptoms of an ectopic pregnancy are:

A good number of these signs occur before you can even tell whether you are pregnant or not. An ectopic pregnancy requires immediate medical attention since it is life-threatening.

Most cases of ectopic pregnancies will require a surgical procedure to correct the position of the embryo lest it dies out with dire consequences to the mother.

When a cyst that had developed in the ovary ruptures, you are bound to feel cramps with no period. The rupture of cysts may be accompanied by some pain in the abdomen on the sides.

Another symptom of an ovarian cyst is pressure in the thighs, lower belly, and lower back. The pain is sharp and is felt on either side of the abdomen.

Crohn’s disease is also called the Inflammatory Bowel Syndrome or Ulcerative Colitis. It is a case of inflamed and swollen parts of the digestive system.

This condition can affect various parts of the digestive system including the intestines and the mouth.

Period-like pain without cramps can be felt at various parts of the body depending on the exact part affected.

Other symptoms of Crohn’s disease include:

The swelling and inflammation of the appendix are referred to as appendicitis.

Among the symptoms of appendicitis include:

Commonly called the painful bladder syndrome, interstitial cystitis is a long-term disease of the urinary bladder which may cause cramps but no period. It manifests as a group of cysts in the pelvic area and on the genitals.

Besides the random bleeding, interstitial cystitis also causes pain during sexual intercourse and when urinating. The pain gets worse during a period.

The pelvic inflammatory disease is a sexually transmitted bacterial infection which majorly attacks most of the body parts involved in reproduction. These include the cervix, vagina, ovaries, womb and the fallopian tubes.

Among the symptoms of a pelvic inflammatory disease include:

Having cramps but no period can also be due to a miscarriage. This is the loss of a pregnancy any time before the 20th week.

Often, a miscarriage will begin as a period then slowly increase to large amounts of blood and a watery fluid.

If you experience cramping but no period, you may be having implantation cramps or what is sometimes called pregnancy pains.

Implantation cramps occur about 21 days or three weeks from your last period. While they are meant to last for just about two days, they may last as long as a week. Some women feel implantation cramps even up to the day they were supposed to have their period.

Physical and emotional stress can have many effects on the body including:

16. Side effects of drugs and remedies

If you are on drugs for a given disease, you could feel pain in the abdomen at any time. This is often a side effect of the drugs. In such a case, only use the drug with the knowledge of its side effects.

Ovulation will occur as long as you have not reached menopause and are not using any birth control methods. It is the process by which a mature egg is released is released from the follicles.

Ovulation pain would be felt around the 14th day of a 28-day menstrual cycle (about midway). The pain is to be felt on one side of the abdomen with rare occasions having pain on both sides of the abdomen. It could be felt on the opposite side in the next cycle or on the same side.

Commonly called ovulation cramps, the pain can range from being sharp and sudden to dull and consistent and should not last for longer than 48 hours.

Among the causes of ovulation pain include:

Could I be pregnant?

When you experience period pains but have no period, you could indeed be pregnant.

If you are expecting your period and the pains come about around a week before the period, then it could be implantation cramps rather than the period.

While you can use the length of the pains to also differentiate between a period and implantation, it is never a sure way to do it.

This is because implantation cramps can take anything from a few hours to a week before they subside.

If instead of a period you see a light pink or light brown discharge, then you should be sure of being pregnant. That is unless you are harboring a disease.

Cramping but not pregnant

On the other hand, if you are having cramps, have no period and you have a negative pregnancy test, then it could be a disease or the effect of stress or even a normal bodily process such as ovulation. The most likely causes of this condition would be:

Anyone or a combination of these conditions may also lead to cramps without a period.

Estrogen levels are high during pregnancy as it (together with progesterone) helps in maintaining the pregnancy. In most women, this milky white discharge is one of the earliest signs of a pregnancy.

Besides a pregnancy, other causes of the white discharge include the following:

Also, doing the test too early will give you a negative result even when you are pregnant. To solve that, do the test after the day you expected your period.

Having a clear discharge accompanied by cramps but without a period can be due to a few causes such as:

You should not rule out a pregnancy given that the increased discharge during pregnancy may range from white to clear and even slightly yellow as is the case for leucorrhea. You need to take a pregnancy test then, if the result is a negative one, have your doctor check for other possible causes.

How to relieve cramps

There are various ways you can relieve yourself of cramps. You have the choice between home remedies and prescription medicine.

For the medicine, you can choose between:

These medicines help do away with the pains associated with a period whether it comes or not.

You can skip the medicine and opt for home remedies which have proven to help you deal with cramps. They include:

Whether you pick on yoga or some aerobics, you can help do away with the pain you feel in the abdomen with some exertion on the body. You should be careful not to engage in heavy exercises given that it will only increase the level of pain you may feel.

Using essential oils can help do away with the pain with ease. You can use them as a balm to massage the affected area or add to your bath water.

Before buying and using any essential oils, make sure you know exactly how to use them to avoid any side effects.

A heating pad can be applied on the painful part of the abdomen with positive results as far as doing away with the pain goes.

You can use a water bottle filled with warm water then applied to the abdomen.

If you don’t have a heating pad or bottle with want water, you can do the following:

Other home remedies for relieving pain from cramps include having an orgasm, eating low-fat foods and drinking cinnamon tea.

Most cases of cramps can be dealt with either using home remedies or over the counter medicine. However, some cases may warrant a visit to the doctor such as:

Generally, if you feel anything you have never felt before, make sure you pay your doctor a visit.