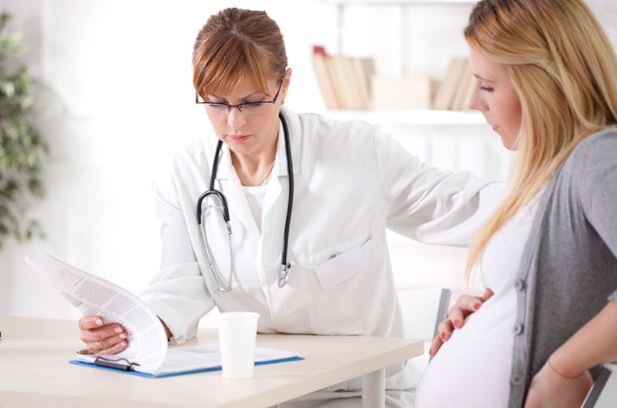 During pregnancy, the amount of vaginal discharge will go up significantly. The color, consistency, and smell of the discharge will also change all through the pregnancy.

In all these, you need to know what kind of discharge warrants worry and which one does not.

Is a dark brown discharge instead of period a sign of pregnancy?

When, instead of your normal period, you are greeted by a dark brown discharge and mild cramps, chances are high that you will be pregnant. This kind of discharge is called implantation bleeding and the slight abdominal pain is implantation cramping.

Implantation bleeding occurs when the egg, after being fertilized by a sperm in the fallopian tube, attaches itself to the wall of the uterus where it will grow into a baby for the next nine months.

The dark brown discharge instead of a period is a sign that the blood in the discharge is not fresh bleeding but rather old blood that was released a while back.

This is because implantation occurs about a week before the period and the blood would have been released a few days before it appears as a discharge.

It all depends on when it occurs, and what other symptoms and signs will be accompanying the brown discharge.

What causes a brown discharge during pregnancy?

The cause of the brown discharge can be traced to a handful of aspects each of which is unique in its own way. The causes include:

At times, there are no specific reasons as to why you may bleed during your pregnancy. For example, given the high number of capillaries close to the surface of the uterus and cervix, any small change be it physical or hormonal can easily lead to bleeding.

In the group of the ‘unknown reasons’ for a brown discharge during your pregnancy are:

Having a miscarriage is one of the most difficult situations to deal with. However, knowing it is occurring can help in saving yourself and, in effect, helps prevent a recurrence of the same.

One of the easiest signs to know of when having a miscarriage is bleeding. The form of bleeding in a miscarriage includes a mix of bright red and brownish-pink discharge besides some tissue.

The typical signs of a miscarriage include:

The ideal location of the implantation process is inside the uterus. At other times, however, the fertilized egg may fail to leave the fallopian tube (due to many reasons). It will thus implant itself in the fallopian tube to cause what is called an ectopic pregnancy.

Even in the fallopian tube, the fertilized egg will still have to burrow itself into the wall of the same tube to start growing. This will also lead to some form of bleeding. Even worse, an ectopic pregnancy can lead to consistent bleeding.

Given that the blood takes a while to come outside the body, it will not be red in color but brown.

If you ever find yourself in this situation, be aware that an ectopic pregnancy can lead to death of the baby and you and should thus be dealt with as soon as possible.

The other symptoms of an ectopic pregnancy include:

The attention of a doctor should be sought as soon as possible if you have a combination of these signs and symptoms.

When you become pregnant, the female reproductive system is highly ramified with blood capillaries. That includes the uterus, the cervix and many other parts of this system.

That means that a lot of blood capillaries are very close to the surface. The ease of bleeding is thus increased immensely.

Any irritations to the cervix will lead to bleeding in varying degrees. Given that the normal bleeding from an irritation is but a little blood, the blood will come out when brownish-pink in color.

Among the causes of this irritations include:

You are naturally expected to lose your mucus plug in the last days of your pregnancy and in preparation for the birth of your baby. This should be from the 36th week of your pregnancy onwards. It may come out as a single plug or as a gelatinous discharge in chunks.

However, there are times when the plug may be lost before the birth due to one anomaly or the other.

In both cases, do not expect the mucus plug to come out as a pure white discharge. Rather, given it is tightly held onto the walls of the cervix, it will cause some mild bleeding. The resultant discharge will thus be brown in color.

Implantation bleeding will occur around the 4th week of the pregnancy. That is the time when the fertilized egg will be implanting itself on the wall of the uterus.

This implantation process leads to bleeding as the wall of the uterus will be ramified with a lot of blood capillaries which easily get punctured.

Implantation can occur any day in the 4th week of the pregnancy as it is a process which takes a while to come to an end. It should take about 48 hours (two days) to come to an end. Anything more than three days of this form of discharge is an anomaly.

Brown vaginal discharge in early 4 to 12 weeks of pregnancy

From the 4th to the 12th week of your pregnancy, the brown discharge you will be seeing will be due to various reasons some of which will change as time goes by. The detailed list is as below:

The fourth week of your pregnancy is when the implantation process takes place. In this week, the brown discharge you will be seeing is effectively implantation bleeding.

It is often accompanied with some mild cramps and should go away by the second (or third) day from when it began.

The 4th week of your pregnancy is also when you are supposed to be having your period. The period is also brown in color and can be the case if you are not pregnant. To draw a line between a period and implantation bleeding, here is a list:

The color of implantation bleeding is brown to pinkish brown. On the other hand, the color of a period is dark brown. Of the two, a period is heavier and thus more viscous.

Implantation bleeding has very little discharge. In fact, you may not even need a tampon or sanitary towel to stay clean. It will also flow intermittently (on and off).

The amount of discharge from a period is heavy and consistent. You will most definitely need tampons and sanitary towels to reign in the flow.

Expect implantation bleeding to go on for about two days with a maximum of three days. On the other hand, the length of time you will have a period is an average of four with some cases going for up to a week.

You may barely notice the cramps from implantation since they are not severe. Period cramps are quite intense with some cases requiring the use of medication.

From the 5th week of the pregnancy, the number of possible sources of the brown discharge goes up. On this list, the one cause missing is the implantation since it does not go into the 5th week. The other causes include:

Since the womb would be growing and undergoing fast changes, having a brown discharge in the 6th week of your pregnancy can be due to the following causes:

The 7th week will more or less have the same reasons for the brown discharge as the other months before it. The list includes causes such as:

With the 8th week, the pregnancy would have progressed a little but the same issues that may cause the brown discharge will be there. They include:

Like the other weeks before it, the 9th week may have a brown discharge due to the following reasons:

As you tend towards the 12th week of your pregnancy, the chances of having both an ectopic pregnancy and a miscarriage slowly go down.

However, until the 16th and the 12th week for an ectopic pregnancy and a miscarriage respectively, they are still likely causes of a brown discharge.

The complete list of the causes of the brown discharge in week 10 has the following:

Some unknown causes are still also likely to lead to the same.

Week 11 of the pregnancy can also have a reasonable amount of the brown discharge owing to the following reasons:

On the other hand, you are still vulnerable to an ectopic pregnancy as it may take a while to take note of it.

Besides the two likely causes, you may have the brown discharge due to the following:

The brown discharge can also occur without any reason at all. As long as the baby and yourself are okay according to the examinations of the doctor, you need not worry about anything.

What does it mean?

The amount, color and consistency of any vaginal discharge can mean many different things. For the brown discharge, here are what its variations mean:

The light brown discharge during pregnancy means that the bleeding is relatively a recent one. This thus means that the process is either still going on or has only recently come to an end.

Among the most likely processes to have a light brown discharge include:

Any processes which lead to a brown discharge in the pregnancy can mix with the normal leucorrhea leading to the brown tinge.

In the early stages of your pregnancy, having a brown discharge will likely be due to implantation. This will be in the 4th week of the pregnancy.

The dark color of the discharge will be because the blood will be relatively old.

If you know the cause of the brown discharge in your pregnancy, there are a few steps you can take to stop or reduce its amount. They include:

Called in some parts as amla, Indian gooseberry is a widely-known remedy for most vaginal infections. It also packs a lot of vitamin C which helps in boosting the immune system to help with defending the body against infections and diseases in general. It can be used in the following ways:

The effect of fenugreek seeds in restoring the pH of the vagina besides regulating the estrogen levels makes it one of the best remedies for most vaginal discharges that are not desired.

Besides these two main roles, it naturally boosts the immune system. Using it requires following the steps below:

The same results can be obtained when you follow these steps:

Besides restoring the natural pH of the vagina, apple cider vinegar is widely used to treat leucorrhea. It also has antiseptic properties which make it a good treatment for most vaginal infections. To use this remedy, follow these steps:

You need to see a doctor in the following cases:

Generally, beware of any anomalies that occur while you are pregnant since it is a delicate time.

4 Vaginal Discharge Colors: What is Normal and What Isn’t – Buoy Current