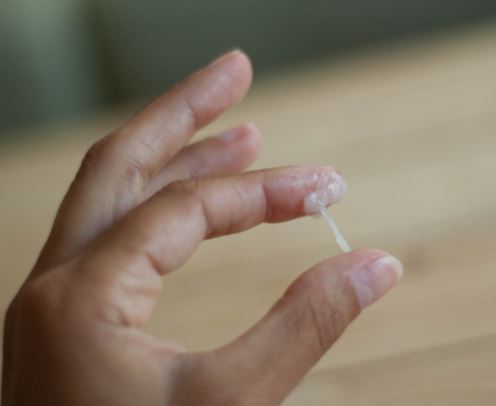 There may be a discharge during the implantation process which is referred to as implantation spotting. This cervical mucus after implantation has its specific characteristics which set it apart from the other types of discharges.

If you just experienced a bloody mucus about a week before your next period, it could be implantation spotting.

The vagina is constantly producing mucus and fluids to clean itself and prevent infections. The normal vaginal discharge is clear to slightly white in color.

The normal vaginal discharge is also very little in amount as you won’t need anything such as a tampon, sanitary pad or even a panty liner to contain it.

However, when certain processes occur in the body, they are bound to cause noticeable changes in the amount, color and smell of your vaginal discharge.

For example, diseases and normal bodily processes such as ovulation, implantation, pregnancy, menstruation, and others will significantly change the characteristics of the vaginal discharge.

Each of these diseases and processes has their unique discharge which is used as a sign to identify them.

When does implantation occur?

Implantation is the process by which a fertilized egg attaches itself to the walls of the uterus where it will grow into a baby.

This process occurs about a week (7 days) to the next period. That is about 21 days from the previous period for a 28-day period.

The cervical mucus after implantation is a red-pink to a light brown color. It is a bit more than the normal discharge and has no odor to it. Also referred to as implantation spotting, this type of discharge may be accompanied by other symptoms such as the following;

You may or may not see any of these signs during implantation. When they occur, take note of how severe they are. For example, if you experience too much bleeding, too much pain or any other sign out of the ordinary, ensure your doctor knows about it.

Does cervical mucus dry up after implantation?

Two things are bound to happen during the conception (implantation) stage;

The drying up of the mucus is a result of a hormonal change which shows that the body would be going back to its normal routine of having a considerably lower amount of mucus.

Do not douche or try to get rid of the dry mucus in an unnatural way. The body will slowly wash it out leaving your vagina normal again.

Spotting or bleeding during implantation is referred to as implantation spotting. It is a common occurrence which is occasioned by the attachment of the fertilized egg on the uterine lining.

This burrowing is what causes pain and some bleeding during implantation. You should be careful with the amount and type of bleeding you should permit or accept to be normal.

The discharge from implantation should not be so much as to require a sanitary napkin or tampon to soak up. At most, you should use a panty liner for it.

Also ensure that the bleeding or spotting does not go on beyond two days (24 hours), has no smell, and not accompanied by itching, nausea, intense pain or other symptoms linked to some diseases.

The egg white cervical mucus you notice after implantation is one of the major signs of a pregnancy. This type of cervical mucus will also be stretchy when a finger is inserted into the vagina. It provides the best conditions for the sperms to swim and fertilize the mature egg.

This type of egg white cervical mucus also allows the sperms to stay alive for up to five days to meet with the egg for fertilization.

The fact that this mucus will be flowing outwards ensures that the weakest sperms are eliminated leaving the strong ones which swim all the way to the fallopian tubes for fertilization process.

The other types of mucus include the following;

The early pregnancy being referred to here is the period from implantation to the end of the first trimester. The color, consistency and amount of cervical mucus varies through the menstrual cycle as follows;

The changes described above describe the characteristics of the vaginal mucus up to conception (implantation). Afterwards, there are more changes which you should expect.

First, the stretchy cervical mucus will help the sperms reach the eggs for fertilization. When the fertilization has occurred, it will change to a creamy mucus and will be so for the most part of the pregnancy.

There may be some changes to the creamy white discharge you will have during your pregnancy. First of all, you may notice a slightly yellow discharge. This is called leucorrhea and a normal discharge during pregnancy as it is made up of the normal fluids and some dead cells.

If you have an infection such as yeast, you may see a cheese-like discharge which may not have a smell to it. Other symptoms of the disease such as itching, a burning sensation, and sexual pain will help your medical doctor know the exact cause of the disease.

You should see a doctor immediately you notice any of these symptoms.

If any of these discharge has a strong smell, causes an itch, is in excessive amounts or any other bodily changes, you should see your doctor right away.