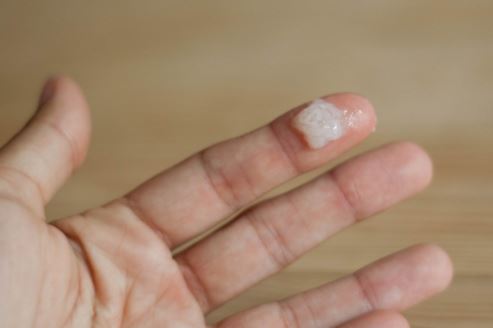 Having a discharge from your vagina is normal since it is the body’s way of cleaning itself. However, a discharge will be termed normal or abnormal depending on its amount, smell and any other signs that accompany it.

The thick white discharge will be the primary focus of this article.

Is a thick white discharge normal?

A thick white discharge is mostly normal unless it has other symptoms accompanying it.

You should also be aware of the fact that the thick white discharge should only appear for a while then go back to the normal discharge which is from clear to slightly white in color and has no smell whatsoever.

The color and consistency of your discharge depends on various factors such as;

These conditions can cause a change in the color of your discharge to white, brown, yellow, green, pink, clear and so on.

A white discharge can occur due to various health conditions, the stage of your menstrual cycle and other aspects. Among the main causes of this type of discharge include;

During pregnancy, there is an immense increase in the level of discharge from the vagina. The normal discharge is referred to as leucorrhea and it has a mild smell with the color being milky white.

Bacterial vaginosis is an infection caused by the overgrowth of bacteria in the vagina. It is common for pregnant women since there is a lot of vaginal discharge during a pregnancy.

Vulvovaginitis is the inflammation of the vulva which is the outer part of the vagina. It can be caused by many issues including;

Among the symptoms of Vulvovaginitis are;

Due to the reduction in the estrogen hormone levels after menopause, the walls of the vagina will reduce significantly. This is called vaginal atrophy and a major predisposing factor for vaginal infections.

The reduction in the levels of estrogen can be caused by other aspects besides menopause including;

Even without an infection, vaginal atrophy will cause the following symptoms;

Most of the changes in the vagina discharge are due to infections by sexually transmitted diseases. Some of the most likely culprits are gonorrhea, Chlamydia, and trichomoniasis.

If it is from trichomoniasis, you will see yellow or green discharge but, owing to it being so thin, it will often appear white in color. Chlamydia and gonorrhea have either clear, green or cloudy discharges.

Many other sexually transmitted diseases will increase and change the color of the vaginal discharge. The most common symptoms of STDs include;

This means that the discharge from a yeast infection will have the consistency of cottage cheese.

Yeast infections are quite common given that every woman is likely to have an infection from yeast at least once in this lifetime. The aspects that will increase your chances of having a yeast infection include;

You will know it is a yeast infection when you see the following symptoms besides the cottage cheese white discharge;

7. A period’s end or beginning

At the end or start of a period, you are likely to see an increase in the thickness and amount of discharge. The color will be white and it will easily go away after a few days without any issues to the body.

After sex, you may see some discharge that ranges in color from clear to white. Some of the reasons for the white discharge after sex include;

What does it mean?

Each case of a thick white discharge has its own meaning. While some are normal cases that require no medical attention, others are signs of serious problems which should be dealt with as soon as possible.  The meanings include;

Having a chunky white discharge with the consistency of wet toilet paper or cottage cheese is a sign of a yeast infection. Yeast infections are a common occurrence as they affect about 75 percent of women.

The presence of yeast in the vagina in healthy amounts makes it easy to have a yeast infection. The yeast has to remain in balance with the healthy lactobacillus bacteria.

When an upset in the conditions of the vagina favors the growth of the yeast, you will have the symptoms. You could have a yeast infection in the following conditions;

The one thing you should always know is that each time you see either a weird color or bad odor from your vagina, you should seek medical attention.

A creamy white vaginal discharge with the consistency of lotion is a sign of a yeast infection. As stated earlier on, yeast infections are quite common and can be due to many different factors.

A thick white mucus that has no odor can be due to many different things including the following;

A point to note is that most people think a yeast infection discharge has an odor when it does not. Also, the discharge from a pregnancy (leucorrhea) has a slight smell to it.

A thick white itchy discharge is definitely a sign of an infection. It can be any of the mentioned infections among them yeast, trichomoniasis, Chlamydia, and gonorrhea.

Any discharge that causes discomfort such as an itch requires to be checked immediately. The degree of urgency increases with a pregnancy.

Thick whitish discharge before and after period

Seeing a whitish discharge just before and after a period is normal. It is a result of hormonal changes occurring with the menstrual cycle. Just like during pregnancy, this discharge does not mean anything is wrong with you. A few days later, it will go back to the normal amount and type of discharge.

As the period comes close, the levels of the hormones in the body will go up leading to the production of a higher amount of vaginal discharge.

If you get pregnant, the level will keep rising up to a given point. If not, it will start going down after the period leading to the thick white discharge again.

Ovulation is the process by which the follicles in your ovaries release a mature egg in preparation for fertilization. This is one of the main processes of the menstrual cycle.

Ovulation, being under the control of hormones will see to an increase in the amount of discharge from the vagina. The normal vaginal discharge during ovulation is clear and stretchy.

However, it may occasionally turn thick and white due to several reasons.

If it remains thick and white in color for long, it will be due to an underlying issue such as infections from yeast, bacteria and other microorganisms.

Prepare yourself to observe a lot of changes during your pregnancy especially as far as your vaginal discharge is concerned. There will be an obvious increase in the amount and thickness of the vaginal discharge during this period.

The early pregnancy period is the few days after fertilization of the egg. When you see a thick white discharge after implantation which is a week before your next period, chances are high that you may be pregnant.

This thick white discharge will be a result of the changes in the hormones of the body.

Leucorrhea is a normal discharge which is made up of dead cells and other bodily fluids.

You should wear a disposable underwear, panty liners or maxi pad and keep off tampons and douching. Douching and tampons only increase your chances of getting an infection.

The amount of thick white discharge and mucus secretion, in general, is determined by the levels of estrogen hormone. During pregnancy, it is relatively higher than usual.

In the third trimester especially weeks 36 to 40 of your pregnancy, the thick white mucus you will see will likely be the mucus plug being washed away to pave way for the birth of your baby.

The mucus plug keeps the baby and the womb secure from infectious diseases from outside the body. When it is time for the baby to be born, it will be washed out.

Depending on the causes of the thick white discharge, the treatment will entail a mix of various remedies most of which can be found with ease.

For the normal cases of the discharge, you do not need to do anything about them other than having a pad soak it up. This is the case for leucorrhea and when the discharge occurs after a period.

For the infections such a yeast, trichomoniasis and bacterial vaginosis, use the following;

Although a good antiseptic and antifungal agent, boric acid is not recommended for you are pregnant as it has side effects.

Owing to its antibiotic, antifungal and antibacterial properties, garlic can be used to treat most illnesses that cause an excessive production of mucus such as yeast and bacterial vaginosis.

Coconut oil has antifungal properties which will play a major role in killing the bacteria and fungi which cause the specific symptoms you may be experiencing with the thick white discharge. To use coconut oil effectively, follow these steps;

You should see a doctor in the following cases;