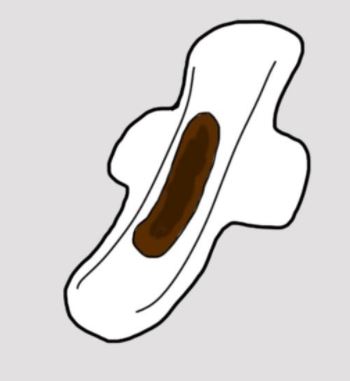 70 percent of women experience black period at least twice in their lifetime. The color may vary and border towards a dark brown tinge.

When accompanied by other symptoms such as lower abdominal pain and headache, the occurrence is not normal. It is important that you visit your doctor the moment you feel something is not right.

The black period in most cases is perfectly normal especially towards the end of your period. However, in most cases, you are advised to visit your doctor to carry out tests and examinations to rule out the possibility of a severe health issue.

Why is my period black?

Dark spotting can occur at any point of your menstrual cycle. The flow may be light or heavy depending on the cause.

There are several reasons as to why your period is black. Here are the common causes of this unusually colored menses:

Research shows that blood gets oxidized when it stays for longer in the uterus. You may experience black period once in a while especially with late periods.

Blood changes its color to black or dark brown when in the presence of oxygen for long.

Even though it is not common, some women have their period during their first month of pregnancy. The period is usually lighter than normal period. In some cases, the blood may be brown or black.

If you happen to know you are pregnant, a dark brown discharge during the first month of pregnancy could be a miscarriage.

As such, see your gynecologist as soon as possible.

Genital infections are mostly caused by sexually transmitted infections and tuberculosis. Endometriosis is the inflammation of the uterine lining, as a result of such infections.

Cervical infections cause discoloration in period blood, change its amount and consistency as well as cause inter-menstrual bleeding.

4. Birth control and use of devices

Some women experience black menstrual blood after starting on a pill or switching from to a new birth control method. Research has shown that there are several cases of black blood with depot Provera injections, implants, implanon, jadelle and intrauterine devices

The morning after pill has also been associated with black discharge. Sudden hormonal changes in the body may lead to a black discharge depending on the time you are in the cycle

Birth control pills release hormones at a slower rate, for this reason, the uterine lining shades off at a similar rate. Because the blood takes longer to get out of the body, it mixes with oxygen in the process, tampering with its color.

Research shows that a woman’s uterus may delay to shed off as a result of stress. Stress blocks secretion and release of reproductive hormones into the blood.

For this reason, you may miss your period or experience late period. If the uterine lining shades off in the absence of low hormones, it will take time causing the blood to become old hence black.

Fibroids rise from a layer of the abdomen called myometrium.  Research claims that the cause of fibroids is related to genetics or individual hormones.

They bleed when they grow large leading to heavy bleeding and severe abdominal pain.

Cancer of the cervix could be another reason why your period is black. When the cervix is lacerated, there could be bleeding, and if obstructed there may be dark brown or black occurring as spotting before or after your period.

The bad bacteria produce enzymes that alter the color of your period.

This usually occurs in women whose hymen is intact, especially in puberty. The hymen may cover the vagina entirely or partially hence allowing no blood flow out of the uterus.

Similarly, women past menopause may experience retained blood because their cervix tends to be narrower than usual.

The black period may also occur in women who engage in intercourse during their period. Blood is pushed back into the vagina and may be trapped until some days after.

Hysterectomy is the removal of the uterus. A black menstrual flow is expected at least two weeks after removal before it ceases.

The reproductive hormones fluctuate highly after this procedure, and a black period is usually cleaning of the old endometrium tissues as ovulation ceases.

Black-red period: could I be pregnant?

The black period could be an early sign of pregnancy. Implantation bleeding occurs almost the same time as period hence makes it hard for women to distinguish the two.

Implantation occurs when the fertilized ovum attaches itself to the uterus for growth and development. Implantation usually occurs between 6-12 days after conception.

During the process of implantation, there may be an injury to the uterine vessels as the egg tries to burrow deeper for attachment. Blood as a result of implantation bleeding delays in the uterus for some time before it flows out black.

The color change is a result of oxidation in the uterine cavity. Implantation bleeding or spotting lasts for three days and is not as heavy the period.

Besides other pregnancy symptoms such as cramping, nausea, and vomiting, it is essential that you visit your doctor for a pregnancy test.

There is no need to panic, if experiencing a dark flow for the first time, you should wait until it’s over so that you can monitor its thickness, duration, and consistency.

However, you should make an appointment with your doctor immediately when you note the following: