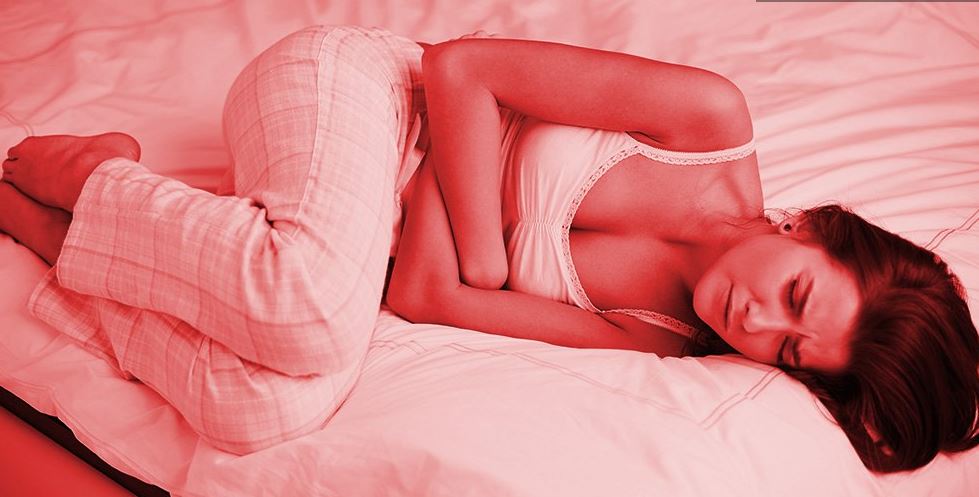 Why am I cramping after my period is over?

Mild to severe abdominal pain is common during menstruation. Most women do not expect it to last for days after the flow has stopped.

However, as part of the post-menstrual syndrome, you may experience the discomfort a little longer, sometimes lasting for up to 6 days post-menstruation.

The cramps may be accompanied by acne breakouts, mood changes, irritability, breast tenderness and even bloating.

So, is it normal to experience pain 2 days to even a week after your period is over? Is it a pregnancy sign or something else?

Stomach cramps are not supposed to occur after the period is over. When they occur, there must be an underlying cause for any pain you will feel.

While some cases may not require seeing your doctor, others could be serious enough to pay your doctor a visit.

Depending on the number of days you feel the pain after the period, you should not rule out a pregnancy. There are many other causes of having cramps after periods as explained below.

18 Causes of cramps after period

Why am I having cramps after my period is over? Many women will have a similar question once the pain either comes back or persists after their periods have come to an end. The main causes include the following:

Hormonal imbalances occur when the glands responsible for producing specific hormones are not working as required. This may lead to either too much or too little of a specific hormone. In either case, the effects of the hormones may be felt either too fast or too slowly.

The effects of these changes in your body include cramps. You may also experience some bleeding even after the period is over.

Natural hormonal imbalances are not to be ignored since they be the signs of an even deeper problem such as organ failure. Have a medical doctor check such a case.

Cramping after periods can be caused by uterine incapacity which is the incapacity of the uterus to expel all the blood there is during a period.

If this is really the case, there is nothing to worry about since the cramps will come to an end once all the blood has been expelled.

Cysts can form in most parts of the female reproductive system. When they form in the walls of the uterus, they are known to cause cramps after periods with some bleeding also occurring.

Uterine cysts will require the attention of a medical doctor as they can lead to more serious health conditions.

In such a case, therefore, you are likely to experience menstrual-like cramps after periods coupled with some bleeding.

If you are used to inducing your periods to go away, you should avoid doing so on a consecutive basis. Rather, let your period come and go in one cycle then you can miss the next one without straining your body.

Cervical stenosis is a condition that leads to the narrowing of the lower part of the cervix. A narrowed cervix can lead to various conditions including infertility or an accumulation of pus and fluid in the cervical cavity.

While some people are born with cervical stenosis, some acquire it due to various health conditions such as:

Fibroids are abnormal growths that occur in the uterus. They are often very painful and can lead to intense abdominal pains. Abdominal pains after period may be a result of fibroids and should be properly diagnosed.

Fibroids are also likely to cause problems with childbearing in most women. The pain felt when you have fibroids is more intense than what you will feel when you are pregnant.

When the tissue grows outside of this walls, the most common symptoms include cramps after periods and bleeding after menstruation in some cases. It is a serious medical condition which requires the attention of a doctor.

If you get pregnant, chances are that you will miss your periods. However, you might feel implantation cramps after periods especially when they happen three weeks after the period.

At such a time, a pregnancy test may not be accurate since the hormone responsible for the pregnancy would still be in very low amounts. In other words, you may still get a negative pregnancy test.

Ovulation pain can occur after two weeks from the last day you had your period. Ovulation is when the ovary releases a mature egg into the fallopian tube. This process is accompanied by some bleeding (ovulation spotting) and pain in the abdomen. The pain may or may not be felt by everyone.

The other reason for these cramps is the spasms experienced by the fallopian tubes are they push the egg towards the uterus.

Although not a common disease, your post-menstrual pain could be due to fibromyalgia. This condition may cause pain in the bones and muscles coupled with fatigue and tenderness.

If your cramps after periods occur with pain when urinating or having sex, then you could be having the Pelvic Inflammatory Disease (PID)

This disease is an infection of the female reproductive system which is quite painful. It affects most parts of the system leading to a lot abdominal pain.

Also referred to as the premenstrual symptoms, PMS is a group of symptoms and conditions of an emotional and physical nature that affect women before the next period sets in.

It is rare to have premenstrual symptoms right after your period ends. Rather the earliest you can have PMS is two weeks before or after the period is over.

This genetic disease causes cysts to form in the kidney in large numbers. Besides causing cramps, polycystic kidney disease can lead to kidney failure.

There is a chance you will feel pain after your period if you are suffering from the polycystic kidney disease.

With blocked blood vessels, it is possible that your post-menstrual pain or cramping is a symptom of this condition.

The parathyroid glands are found in the neck. Too little of the parathyroid hormone leads to various issues whose symptoms include abdominal pains.

If you think your pelvic pain after period ends is caused by hypoparathyroidism, see a doctor for proper diagnosis and treatment.

Due to conditions such as endometriosis and uterine fibroids, you may experience dysmenorrhea. Dysmenorrhea is basically a medical term for painful periods. This pain is felt even after the period has come to an end.

This is a very common health condition as research shows that it occurs in two women out of a total of three.

Dyspareunia is a condition which leads to pain in the abdomen which occurs deep inside of the abdomen. It is caused by both emotional and physical causes with the pain varying in intensity from one person to the other.

Adenomyosis is a condition in which the uterus lining extends and grows into the wall of the uterus. When in a severe situation, it can lead to bloating and painful cramps.

Any one or a combination of these conditions and diseases can lead to cramping after period is over. Depending on the length of the time between the periods and when the period occurs, you have several culprits for your cramps.

Abdominal pain 2 days after period is over

The contractions of the uterine wall will lead to pain and some bleeding as the remaining blood is expelled from the uterine cavities. Therefore, your post menstrual cramps may be accompanied with spotting after the period ends. In some cases, the late expulsion of the period blood can be in the form of blood clots.

If cramping after period occurs three days later, then there is an anomaly with your reproductive system such as an infection.

However, it could just still be just be another case of uterine incapacity with the uterus completing the elimination of any menses blood.

Even in the 4th day after the period, having cramps cannot automatically mean you are pregnant. It is still too early to make such a conclusion since you would be about 10 days away from your ovulation date.

This leaves you with a medical problem such as endometriosis. If the cramps are severe, visit a medical doctor.

Cramping after period on the fifth day is still not a sign of pregnancy. Just like what would happen on the 4th day after the pregnancy, you may be having an underlying medical problem such as endometriosis and the pelvic inflammatory disease.

As far as the menstrual cycle is concerned, none of the major events should be occurring as ovulation would be around 9 days away, implantation about 16 days away and the next period about 23 days away. That narrows down the reasons as to why you may be cramping on the 5th day to diseases and infections.

If the cramps start a week after the period has come to an end, then the chances of an early ovulation are high. These chances will go higher if you have irregular periods and the cramps stopped with your period and are now just resuming.

Even with that, you should not be carried away with the prospects of a early pregnancy, rather, ensure you have had the examination of a medical doctor to ascertain exactly what the problem is. Having the pains a week after your periods are over can as well mean you are having a serious illness.

While a perfect menstrual cycle would have ovulation pain on the 14th day, it can still occur a few days earlier. In this case, the 10th and 12th days after the period are as good as the 14th for the ovulation to occur.

However, it does not necessarily mean that your ovulation would have come earlier than usual. In fact, cramping after period on the 10th to the 12th (or even 13th day) could still mean that ovulation will occur on the normal 14th day after the end of the period.

This would be because, before ovulation takes place, the eggs grow in size in the follicles. This growth puts pressure on the walls of the ovaries leading to some discomfort in some women.

When you find yourself having menstrual-like cramps after period on the 14th day or thereabouts, then you are most definitely ovulating. Ovulation cramps occur midway the menstrual cycle which is around the 14th day from the previous cycle.

Ovulation pain occurs due to several reasons including;

Am I pregnant when spotting?

I have abdominal pain after period could I be pregnant? As explained above, spotting and cramps after the period has ended can mean many things.

It all depends on when the spotting and cramps occur. If these two incidences take place around the second week from the period, then it is simply ovulation.

If the cramps and spotting occur right after the period is over, it would be a case of uterine incapacity which would come to an end once the remaining blood has been eliminated from the uterine cavity.

Occurrence of cramps and spotting after the period has come to an end at any other time would be a health condition that requires a visit to the doctor.