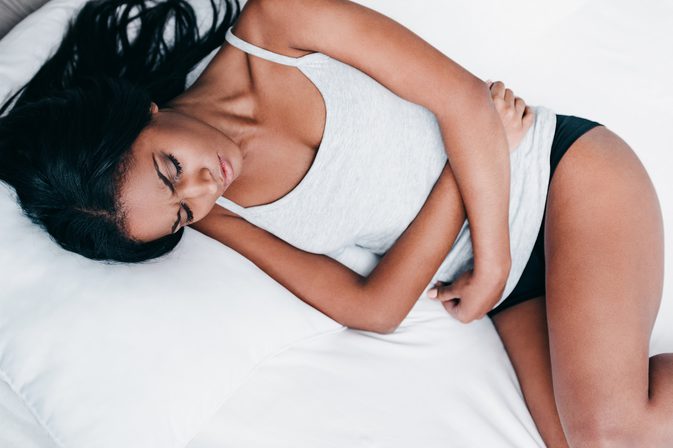 PMS symptoms are the signs that appear in the body before your periods set in. They differ in intensity and time of occurrence in different women.

But what should be normal and what is considered extreme? How long should PMS last? What are the best relief remedies to get rid of these annoying signs?

What does PMS mean?

PMS stands for premenstrual symptoms. This is a group of symptoms that precede menstruation. They then reduce in intensity or go away completely when the period starts.

The same symptoms will differ in severity and will stop when the period stops such as during menopause or a pregnancy.

Depending on the individual, these symptoms may appear from one to two weeks before your period sets in. As long you have started seeing your menses, the symptoms will appear.

Depending on how you experience these symptoms, their appearance will reveal to you that your period is not far off after all.

The one thing you ought to know is that the appearance of these symptoms may be easily confused with other signs for other processes in the body. Given that it may appear a week to two before the period, it can be confused with:

While the causes of the symptoms are not exactly known, the suspected causes are;

When the doctor checks for the symptoms, they need to ensure that whatever you are experiencing are indeed premenstrual signs and not one of the following:

The diagnosis for PMS involves recording the symptoms you feel either on a PMS symptom tracker or a calendar from several menstrual cycles until you can establish a routine in the symptoms.

There are many period signs which fall under the premenstrual category. As stated earlier on, the symptoms may differ in intensity and when they occur. The most common types of premenstrual signs include:

Stomach cramping or pain is the most common of all the symptoms that occur before a period. The pain from this symptom often occurs in the lower abdomen and it can range from mild to severe. These pains may also occur on a consistent basis or they go on and off.

The abdominal pain you feel before and during your period is caused by chemicals called prostaglandins which are responsible for most types of pain in the body.

The presence of prostaglandins is made possible by the hormonal changes which occur towards the next period.

Premenstrual abdominal pain should not have a discharge associated with it. This is because, if it is the case, it could be another issue such as:

It is easy to know if you have one of these diseases since they have a discharge that flows at any time.

Is dizziness a symptom of PMS?

Many women have reported feeling light-headed towards their periods. This too is a common symptom caused by the abundance of prostaglandins in the body towards your period.

The dizziness often extends to the period due to the presence of the prostaglandins and the loss of blood.

You have to be careful since the dizziness could be due to anemia and not just the period. If it is just for the period, it should be mild in nature and only occasional.

Nausea with or without vomiting is another common premenstrual symptom. You will have nausea due to the changes in the hormones as your period gets close.

Due to the close association between nausea and pregnancies, it is easy to confuse the nausea you may have during the premenstrual period with a pregnancy. This can be the case especially when the nausea occurs a few days before the period.

The main reasons for nausea during menses include:

If the nausea is severe, see a doctor.

4. Bloating, constipation and diarrhea during period

The presence of prostaglandins and other hormones and chemicals in the body have been linked to bloating, constipation, diarrhea and other upsets of the digestive system.

The reason for this is that these bodily chemicals are meant to work only on the reproductive system.

When they spill over into the digestive system, they will likely cause undesirable effects among them diarrhea, bloating, constipation and even nausea.

These same symptoms such as bloating and diarrhea can be observed early in pregnancy. You should thus look for any other signs that suggest or dispel the possibility of a pregnancy.

There are many ways in which you may have mood swings when having premenstrual symptoms. The hormonal changes are the main cause of these mood swings. The most common changes in your moods you may notice include;

Feeling tired is also a common premenstrual symptom which may be confused with a pregnancy. It may occur such that you feel exhausted most of the time even without having had any physical exertion.

Feeling tired during the premenstrual period is not severe although quite common. It should be solved with enough sleep and eating foods with enough vitamins and minerals.

If you have extreme fatigue that does not go away easily, talk to your doctor about it as it could be another issue and not a sign of PMS.

Like all the other symptoms before a period, acne breakouts are caused by hormonal changes in the body.

In the first half of your menstrual cycle, the estrogen hormone is the most dominant. It goes down in levels in the second half as progesterone goes up in amount. When the period sets in, both hormones will drop in amount.

The rise in the progesterone hormone causes the skin to produce more sebum than usual. Sebum is the oily substance produced by the skin to keep the skin supple. However, when produced in large amounts, it blocks the pores of the skin.

When the female hormones (progesterone and estrogen) reduce in amount towards the period, the progesterone hormone will be in considerably higher amounts leading to the overproduction of sebum.

The excess sebum produced would clog the pores of the skin thus increasing the likelihood of an acne breakout. The presence of the sebum will also provide the right conditions and food for the bacteria that cause acne (P. acnes).

You might also gain a few pounds just before your period. As one of the premenstrual symptoms, weight gain before periods is not permanent as it is often a result of retained water.

The water is retained mainly as a result of the hormones and the likelihood of eating more salty and fatty foods from cravings.

The hormonal changes responsible for most of the premenstrual symptoms are the same ones that will alter your appetite in various ways. Out of nowhere, you may have a strong craving for some foods especially those that are salty and fatty.

On the other hand, you might have aversions for certain foods which you normally have a great affinity for.

These aversions and cravings can be easily confused for a pregnancy when they are not. You need to keep a correct and updated track of all your menstrual cycle to know what is possible and what is not to avoid panicking for nothing.

You might feel some pain, tenderness and swelling in the breasts before your periods. It may not be as severe as during a pregnancy but you will still feel the changes.

Similar to the other symptoms, changes in the breasts may not even occur. Others may have quite intense manifestations of this symptom.

You could also notice some changes in your sleep cycle. You may either sleep too much or too little some days or weeks to your next period. This is normal since you could get fatigued and require more sleep; or you could lose sleep due to the bodily changes.

Due to the unfavorable changes in the body, you will not likely think of having sex at this time. Stress combined with nausea and other symptoms make it quite difficult to think of or have a desire for sex.

At times, joint and muscle pains may be caused the incoming period as thus a premenstrual symptom. Again, the pains are varied in intensity with some not even feeling them while others having a lot of discomfort from them.

There may be more of these symptoms that have not been mentioned here. You need to keep track of the changes you go through in at least three menstrual cycles to know exactly which ones are premenstrual symptoms and which ones are not.

This way, you can discover most anomalies early on.

How long do PMS symptoms last?

PMS symptoms can last from a day to about two weeks before your period sets in. It is an individual difference which determines how soon they appear. The one aspect that is similar in all cases is that they will go away as soon as you see the period.

If the same symptoms are observed throughout the period and even afterwards, then it would not be the period which is causing them. Your doctor should be able to identify the actual cause after an examination.

Can you get PMS symptoms after period?

However, if it occurs in the two weeks after your period, it would be termed as post menstrual symptoms or the Post Menstrual Dysphoric Disorder.

Post menstrual symptoms are very much similar to the premenstrual ones. It may be difficult drawing a clear line between them.

In fact, the only way to tell them apart is their occurrence relative to the period (post is after while pre- is before the period). The post menstrual symptoms include:

While the normal symptoms before menstruation can be easily dealt with, PMDD may require medical intervention to restore normalcy.

How to get rid of PMS fast

There are several ways you can employ to get rid of the PMS symptoms. Some entail using drugs while some go for home remedies. They include;

Most of these symptoms can be easily dealt with using home remedies. However, when you experience intense variants of the same symptoms, do not hesitate to see your doctor.