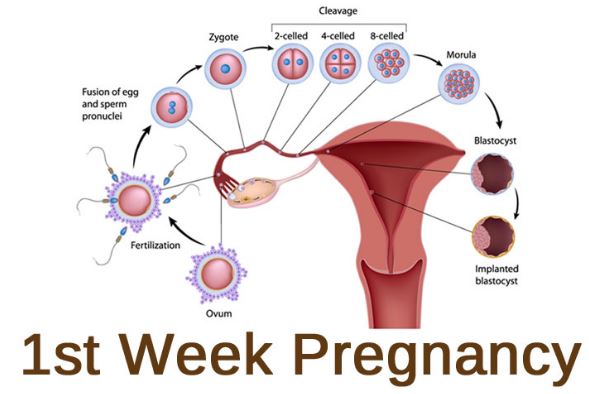 While you may think that having a positive pregnancy test result means that is your first week of pregnancy, you could be several weeks pregnant already.

The changes in the first week of your pregnancy are quite hard to notice.

When are you 1 week pregnant?

By then, fertilization would have occurred at least a week earlier.

For this reason, the normal duration for a pregnancy can be 40 weeks or 41. This conclusion was reached after doctors agreed that, during the very first week of your pregnancy, you would still be in your normal menstrual cycle. It is thus only after you miss your period that the pregnancy starts being counted.

The other reason for this choice is because it is only after one to two weeks after conception that the symptoms and tests of a pregnancy can be observed and proven respectively.

The HCG hormone will be in measurable amounts one to two weeks after conception. Given that this is the test used for verifying the pregnancy, testing earlier than that will give you a negative result even when you have conceived.

Most of the signs and symptoms of your pregnancy will be those of your period in the first week of the pregnancy. They will often last from two days to around a week before they change in nature. They include the following:

As your uterine wall contracts in response to the changes in the hormones, you will experience cramping and pain in the lower back. This pain will go away when enough of the uterine wall has been shed.

The cramps are less intense when compared to the cramps you will have in your period.

The hormones at this time of your cycle will favor the retention of water in the body. This is because they will be preparing the body for the pregnancy hence the need to slow down digestion processes.

For this reason, a lot of nutrients and water will be retained by the body.

Similar to menstrual migraines, you will have intense headaches in the first week of your pregnancy.

The drastic rise and fall of hormones will affect your moods negatively. You have moments of intense depression and slight elation.

You will notice that you would gain a few pounds in the first week of your pregnancy. The retention of water and increase in the uptake of nutrients from the food you eat will lead to increase in weight.

The hormones will slow down the digestive process and absorb a lot of water from the food eaten. As a result of this, you will have constipation.

The hormones of the reproductive system tend to spill over to the digestive system with the result of a few upsets. For example, stomach upsets in the form of diarrhea are common at this time.

You will have spotting to a given level since the wall of the uterus will be undergoing some changes.

A part of the walls of the uterus would be shed as the hormones shift in response to the conception.

Normally the uterus lining would be fully shed if you do not get pregnant as the hormones would drastically change afterwards. With a pregnancy, however, the hormones would increase in amount to thicken the uterine wall further. In such cases, some spotting is possible.

Compared to an actual period, the bleeding when you are 1 week pregnant is in small amounts.

When you are a week pregnant, the size of your belly should be the normal size you are used to. This is because the fetus would still be a little mass of cells not able to create a visible bulge.

Bloating during this period can however make you a bit tight about the waist. The retention of water will also add to this tight feeling around the waist

It is highly unlikely that you will have an ultrasound when you are only a week pregnant. This is based mainly on the fact that few people go for this kind of test during the first few days of their pregnancies.

You may however have the same test when you have been trying to have a baby for a while and are thus monitoring the processes of the body that affect fertility such as:

Even if you choose to carry out an ultrasound test at this stage of the pregnancy, you will not see the fetus given that it’ll still be too small to create a visible mass.

The baby at 1 week pregnant

There are a few notable aspects about the baby when you are just a week pregnant. These include:

Once you become aware of the signs and symptoms stated above, you need to make a few changes to have the best experience when pregnant. These include: