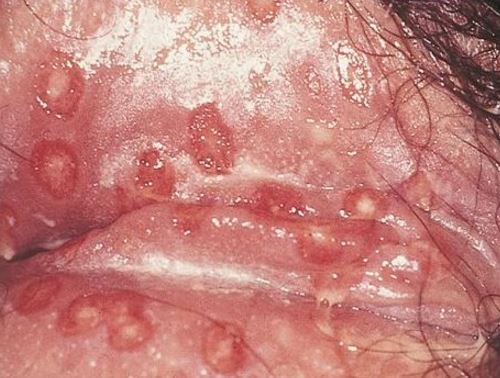 Sores, bumps, and blisters can occur in the pubic area due to different reasons. When present, they will make you feel uncomfortable, itchy and even pain at times.

Vaginal lesions, blisters, and sores look no different from the ones you would get on the other parts of the body due to burns, friction, and infections. They may develop a clear liquid inside them or have pus mixed with some blood. It all depends on the causes.

In most women, the first signs can be felt some hours or days before the lesions finally appear. This stage is referred to as the prodrome stage and its duration is determined by the cause and your overall health.

The prodrome stage can be characterized by various symptoms including tingling and burning sensations that can be quite painful. Some people may even experience fever during this stage.

If caused something else other than a sexually transmitted disease (STD), bumps would feel like a gel bubble and be clear in color.

Other times, they might look red to a dark color with the darkness coming in the advanced stages of their development.

Unless caused by an STD, the sores should not be itchy, filled with pus or have a bad odor. They are also generally expected to be dry.

On the other hand, vaginal bumps caused by STIs will be itchy, have pus and would also likely have a bad smell to it. The shape of growths also ranges from a cauliflower-like shape, flat or even raised. They might also be soft and moist and likely filled with pus.

Causes range from physical causes such as friction to infections with diseases.

Blood blisters in the genital area are a common occurrence especially when one’s age advances towards the 50s. If the blisters are only red in color and there is nothing more to them, then you have nothing to worry about since they will not be a symptom of a sexually transmitted disease or other condition.

These types of sores can also be seen under the breasts and the wall of the chest besides the labia. They are caused by some of the normal changes that occur in the body including a thinning skin and changes in the tissues of the body.

If you notice blood-filled cysts that are accompanied by other symptoms such as pain, burning or itching sensations and any form of bleeding or discharge, you should pay your doctor a visit to have a checkup done right away. This is because it could not be a simple case but a sign of a developing health condition.

While age is the main cause of blood blisters in the bikini area, you might have them while young simply out of the normal changes in the body. Again, unless there are some other bodily changes that come with the blisters, you have nothing to worry about.

Fever sores, which are also called cold sores, are painful cysts whose cause is the HSV (herpes simplex virus).

This type of blisters will appear on any part of the body although the most common locations on the body include the fingers, cheeks, nose, lips and the mouth. It is not uncommon to see them on the labia (vaginal lips).

Fever blisters will last for about 10 days before they dry up. While they remain fresh, cold sores will be contagious and should thus be prevented from contact with healthy persons until they start forming a crust.

In most cases, these will not be a health risk. However, in people with a compromised immune system, they may lead to more serious health consequences.

The symptoms of cold sores include the following:

Herpes simplex lesions are more often caused by the herpes simplex virus (HSV) type 1 than by type 2 of this virus.

This is because the second type of this virus does not have many symptoms and is also less prevalent compared to the first type.

The common procedure for blisters involves their formation, breaking and oozing followed by a yellow crust which sloughs off and leaves new skin below. This whole process will take anything between 7 to 10 days.

It is estimated that up to 90 percent of all people on the planet will get cold sores in their lifetime.

However, only about 40 percent of those affected by the cold sores will experience a recurrence of the same.

This is because, following the first attack, most people will develop immunity against this illness and specifically the cold sores. The severity of the sores is high at the first time one has the herpes simplex virus but reduces in the subsequent attacks. If it affects children, the herpes virus can cause severe symptoms.

Cases of the herpes simplex virus while often mild may be severe in the cases where one has a weak immune system such as in HIV AIDS patients and those on medication.

Also, having severe eczema can lead to the occurrence of cold sores on a large scale. Treatment of cold sores should be prompt as it may spread to the eyes to cause blindness, or to the brain and cause encephalitis and meningitis.

Friction sores inside the vagina result from rough or dry sex. This occurs when you engage in sexual intercourse without enough lubrication. This can be due to lack of foreplay or a health condition which leads to a dry vagina.

Sores from rough intercourse are similar to the blisters you get when you have a mild burn or friction on the body. Solving this issue is as simple as;

At times, vaginal lesions and soreness is referred to as vaginal trauma.

At times, vaginal inflammation can be caused by the type of clothing you wear. Any clothes that rub against the skin are likely to lead to blistering.

The quality of the underwear is also a factor when it comes to preventing blisters. First, if you wear underwear that is too thin, it will do little to prevent friction between your skin and your clothes.

Secondly, if you wear clothes that are too thick, they will accumulate sweat in the pubic area thus making the skin more prone to friction when moving about. Most preferably, people use cotton underwear of medium thickness for the best results.

If you wear synthetic undergarments and bathing suits, you are likely to increase the moisture in certain parts of the body.

These are prime breeding grounds for bacteria and fungi which may cause diseases and blisters. The same infections can be a result of the chemicals that are found in some swimming pools. The infections can also cause certain symptoms such as sores to occur.

When you are stressed or are feeding on a poor diet, your body is likely to respond in certain unfavorable ways. Some people will have dry skin while others will experience blisters on various parts of the body especially the groin.

In such a case, one would normally have a single sore that is very painful.

When riding a bicycle or a horse, you may develop blisters in the vaginal area owing to the high level of friction experienced in the groin.

While certain riding positions can help you prevent lesions, you may also consider wearing enough padding before going out on your ride. Even better, learn to ride correctly to prevent the occurrence of the sores.

Because of the sensitivity of the genital area, shaving can easily irritate this region leading to blisters and soreness. Most people will have a few blisters after shaving especially when the blade came into contact with the skin and they have a sensitive skin. To prevent such a case;

Chemicals may cause the inflammation of the genital area leading to blisters on vagina in some people. Some of the most common substances with chemicals include;

If you take the following drugs, you might be in danger of an allergic reaction which may lead to blistering. They include;

Contact with these chemicals in soaps and fragrances will likely lead to allergic reactions. If you find out that your soap or other bodily substances case blisters or other symptoms, you need to change to fragrance-free or hypoallergenic options.

The likely cause of white bumps are physical causes such as;

Essentially, white sores on the female genital area will be the result of given physical causes which disturb the skin in the groin in one way or the other.

You can know your symptoms have been caused by an STD if there are other symptoms of this disease. For example, you may have;

Ingrown hair occurs when the tip of the hair grows back and either touches the skin or grows right back into the skin. The groin area is particularly prone to ingrown hair with the result being sores and painful bumps.

How to get rid sores

There are many methods available to treat vaginal blisters and sores. The two main categories include home remedies and medical treatments.

The exact type of medicine will depend upon the cause of the problem. Commonly prescribed medicines include:

These medicines may be administered orally or as creams and any other methods seen fit by your doctor.

Some home remedies can give some relief for female genital sores and blisters.

No matter the cause, baking soda remains one of the best remedies for vaginal blisters and sores. It has many properties which make it a great solution to soothing the pain, killing any infections, and drying the blisters up.

Olive oil has antibacterial and soothing properties which make it a good remedy for vaginal blisters and sores.

These and many other remedies will help stop the itch and pain from the blister or sore while doing away with them. If you blisters are caused by a disease, they can also help in treating it.