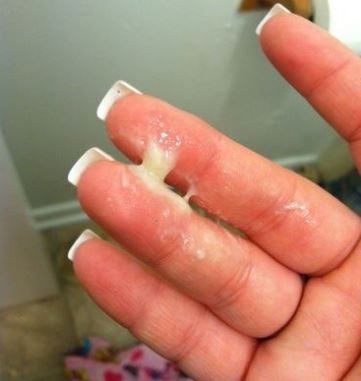 A vaginal yeast infection can present as thick yellow, white or pink discharge in color.

In severe cases, you may get a bloody fluid or no discharge at all. Most yeast infections are accompanied by an itchy feeling that gets worse when not treated.

The most common symptoms of this infection include discharge, pain during sexual intercourse, itching and a burning sensation during urination.

However, women have yeast in their vaginal area even without symptoms.

When you have a candida infection, you may experience a yeast infection discharge which varies in color from yellow, pink to a thick white mucus.

Can you get a yeast infection without discharge?

Besides a yeast infection, other causes of abnormal vaginal discharges include:

Yeast infections are caused by the overgrowth of the candida fungi in the vagina. Normally, there are bacteria and yeast in the vagina in a balance. The bacteria lactobacillus coexists with candida by producing an acid which keeps the yeast in check.

However, there are some factors which can lead to the growth of the yeast over the lactobacillus bacteria. Such conditions include:

In general, these are referred to as the risk factors of a yeast infection.

However, there are times when the color of the discharge might deviate from white to a yellow, pink or blood tinged variant.

All the discharge colors are explained below with their meanings and what you should do when you see each.

There is controversy as to whether the thick white discharge is a sure sign of a yeast infection or not.

Through scientific studies, there has been a general agreement that a thick white discharge can either be a sign of a yeast infection or not.

This is because there are many other diseases with exactly the same type of symptom.

Another aspect to note about the thick white discharge from a yeast infection is the smell. Most cases of a fungal infections will have an odorless discharge (no odor).

However, at times, it could have a distinct odor accompanied by an intense itchy feeling. These are advanced stages of the infection.

Therefore, you should see your doctor as soon as possible. The odor smells like beer or bread.

If the color of the discharge changes from the thick white one, there is reason for concern.

A yellow vaginal discharge is also a possibility once you have a vaginal yeast infection. The yellow discharge is not a common occurrence when having a candida infection (See pictures below).

When you get a yellow discharge from a fungus, you should see a doctor straight away. This is because a thick yellow discharge will only appear when the disease has advanced or is with another illness.

Often, the yellow discharge is accompanied by an odor and a swollen vagina. Pain during urination and sexual intercourse is often felt during this time.

A pink vaginal discharge may also be caused by yeast or candida. The color is pink because your discharge is likely to be mixed with a little bit of blood spots.

If the infection gets worse, you can end up with a bloody yeast infection discharge.

Unlike the yellow discharge which is mostly visible in the advanced stages of the infection, a pink discharge can be seen at any stage of the disease.

You can experience the pink vaginal discharge even at the start of a candida infection.

Most of the yeast infections that have a pink discharge are accompanied with an intense itching.

A blood tinged vaginal mucus is also a common symptom of a yeast infection. Not all patients with a candida infection will get a bloody discharge.

For both pink and blood-tinged discharge, the cause is the inflammation in the vagina that can lead to slight bleeding or spotting.

When you pay your doctor a visit for a checkup, there is a lot you ought to expect especially as far as the discharge is concerned.

Among the details you will be expected to give to your doctor include;

Generally, the doctor will need to know of your medical records to ascertain what would have caused your specific yeast infection discharge.

A yellow discharge after you have been treated for a yeast infection can be due to another infection, or the side effects of the drugs you took.

This is because most cases of yeast infections can be easily done away with using some antibiotics. The discharge from this infection also dries up quite quickly once the medications are administered.

If you are taking yeast medications and the discharge changes to a yellow color, the chances of another infection are quite high. While most vaginal infections will lead to a discharge, the one known for a yellow discharge is trichomoniasis.

The fluid is often yellow-green in color and may have a frothy texture. An infection by trichomoniasis is often itchy with some pain when urinating and during sexual contact. Other diseases known to produce a discharge include:

While trichomoniasis is the first suspect, the advice of a medical doctor is the one thing that should settle your worries.

If the yellow discharge is the result of a drug treatment, then you have nothing to worry about since it would be gone once the dosage is over.

One of the most common drugs for a yeast infection is Monistat-1. Most of the patients who have used Monistat-1 treatment have experienced a yellow discharge that goes away once the dosage is over.

Besides the discharge caused by a yeast infection with its distinctive colors, other symptoms of a candida infection in your vagina may include mild to severe itching, a rash on your vaginal area or groin itching, a smelly odor and even a milky discharge.

Vaginal itching is a common symptom that accompanies most yeast infection discharges. It may make you feel very uncomfortable as it gets worse with time.

The itching from a yeast infection can be soothed with oral medications such as antihistamines.

Often, the milky or cottage cheese discharge has no smell unless the disease is in its advanced stages. In such a case, most home remedies and antifungal drugs can be used to get rid of the infection.

Besides an abnormal discharge, a vaginal rash is a common symptom of a yeast infection. The rash is often accompanied with a discharge and is very itchy.

When you scratch the area that had the rash, you are likely to spread it to the rest of the vagina. Also, the scratching will make the area sore.

Sore bumps and rashes on the inner thighs and pubic area may be caused by a fungal infection. See also the signs of jock itch in women.

When you have a smelly discharge due to a yeast infection, then chances are that the disease is in its advanced stages and you should be seeing your doctor over it.

The normal discharge from a yeast infection usually has a milky white color.

You should be careful when you have a smelly discharge as it may be a sign of a bigger problem such as cervical or endometrial cancer.

If you have a fish-smell, it is unlikely to be a candida infection. The most probable cause is a bacterial infection.

A yeast infection discharge can also be watery and clear in nature. However, having a clear discharge may not necessarily mean you are having an infection such as that of yeast.

When you have a vaginal candida infection, however, the color of the discharge may not change at all. Rather, the amount of the watery discharge will be increased in amount.

6. Redness and swelling around vagina

A yeast infection discharge is likely to be accompanied by a rash that makes the vagina red and swollen.

This can be caused by the rashes that develop on the genitals and the actual symptoms of yeast which causes the affected area to swell.

The same redness and swelling can be observed in other parts of the body which have yeast infections such as the throat and cheeks.

7. Burning sensation when urinating and during sex

When you have a yeast infection discharge, your vagina will become sore and anything that increases the inflammation will also increase the pain you feel.

Among the most painful symptoms of yeast infections is passing urine or having sex.

Due to the soreness of the vagina either from rashes or scratching the itch, the disturbance from sexual activity increases the pain you will feel.

Urine, being acidic in nature, also increases the level of pain you feel in the vagina.

When there is a complication

Even though yeast is not often a serious issue, it may become complex if it is not treated early enough or it combines with an existing condition. It becomes a complication if you have

Vaginal itching but no discharge

There are cases when you have a vaginal itch but have no discharge (or any other type of discharge). In such a case, it is unlikely that you have a yeast infection as it could be another issue.

While you should not rule out a yeast infection, other causes of a vaginal yeast without a discharge include:

In such a case, therefore, the extent and intensity of the itch will determine what you do next. If the itch is mild and goes away after a while, you can ignore it.

However, if it persists and is accompanied by other symptoms such as fever and sores, you ought to see a doctor for a checkup.

To establish whether you have a yeast infection or not, there are various procedures that you can expect to go through at the doctor’s office. They include:

There are various treatments that you can have once you have been diagnosed with the yeast infection. They include;

Whether the medication regime chosen is on a short term or long term basis will depend on the extent of your infection and whether the yeast infection is complicated by any other prevailing conditions or not.

Once you notice a yeast infection discharge, you might find it handier to use a home remedy for this infection before heading out for the doctor’s appointment. The most common home remedies include the following;

1.Boric acid; boric acid is employed in the treatment of yeast infections especially those that are resistant to conventional medicines. While it is under home remedies on this list, boric acid should only be taken with the prescription of a doctor.

2.Yogurt; yogurt has the lactobacillus bacteria which works to limit the level yeast in the vagina to normal amounts. It can either be eaten or applied on the vagina every once and again to give the healthy bacteria a boost.

3.Baking soda; baking soda can be added to a bath and the body soaked in it for a while. The components of baking soda make it difficult for the yeast to continue multiplying and causing more pain.

First, the baking soda is alkaline in nature meaning that it will introduce an alkaline environment that is  not conducive for the candida to survive. Secondly, it dehydrates and kills the fungi to get rid of them.

4.Coconut oil; coconut oil is one of the most potent solutions to a yeast infection. The best type of coconut oil to use is an organic and natural one as it has the right ingredients to deal with the infection. You can apply the coconut oil on the vagina and the groin area in general.

When you have a yeast infection discharge, you have an array of solutions at your disposal.

While most cases will require mild antibiotics, others can be solved with home remedies.

However, you need to visit a doctor whenever you experience the advanced symptoms of the disease or any other symptoms that are not the norm.