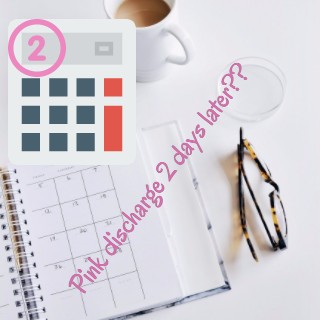 Why do I get a pink discharge after period is over? What causes light pink spotting or mucus 2 days to 1 week after menstruation? What does it mean? Is it an infection when accompanied by a foul odor?

A normal vaginal discharge is odorless, clear or whitish in color and changes to thin 1 week after your period. Most women find themselves confused as a result of not being able to tell the meaning of the discharge.

Unless your discharge is smelly mucus, it is absolutely normal to have a pink discharge 2 days or even 1 week after your period.

Yes, it is normal as long as it occurs to a healthy woman and does not cause any discomfort. Ovulation bleeding is the primary cause of a pinkish discharge two weeks after a woman’s period.

An ovum in most cases causes abrasion of small blood vessels on its way out of the follicle. This slight damage to the tiny blood vessel is the cause of pink mucus discharge.

Therefore, a pink discharge after your period with such symptoms is abnormal, and you will need to seek medical attention immediately.

Why do I have a pink discharge after my period ends? This is one of the major concerns of women experiencing such discharge days after their period. Most if not all women are always happier and relieved once their period ends. A normal discharge is usually white or even a bit brownish when exposed to the air.

Should you get worried that yours is pink? Unless the discharge lasts longer than a week, no need to raise an alarm. Here are some of the common causes of pink discharge after a period:

In the case of fertilization, a pink discharge will occur two weeks after period. One of the earliest signs of pregnancy is implantation bleeding.

It occurs when the fertilized egg attaches itself to the uterine wall. A light pink spotting occurs in most cases and lasts up to 2 days.

Light pink ovulation spotting is a normal occurrence. Ovulation can trigger one to have a light pink discharge. When the egg ruptures as it gets released from the ovaries or the follicle holding it, bleeding occurs.

As the egg travels to the fallopian tubes, bleeding and bloating can be the immediate symptoms. A slight pink bleeding is normally as a result of a broken cyst follicle. Ovulation usually occurs from after 14 days of your last menstrual period.

Your hormones can be altered by several factors such as climate change, stress, endometriosis, and cysts.

One of the most used contraceptive by women is the birth control pill. The pills are made in such a way that once taken; they mimic the natural sex hormones. Estrogen and progesterone are the two main hormones regulating and controlling a woman reproductive system.

A pink discharge after period is common with a pill such as plan B since it causes hormonal imbalance in the reproductive system. In case you miss your pill, you are also likely to suffer from a pink mucus.

Deep penetration during sex can also cause injury to the fragile small blood vessels located near the cervix.

Intense sexual arousal can again lead to breakage of these blood vessels causing a discharge. A pelvic contraction during sex is also a major cause of trauma to the vessels.

Infections spread to different parts of the woman reproductive system causing the following diseases which may be the cause of a pink discharge after period or sex:

Most women do not show symptoms of fibroids but will notice a gradual abdominal increase a sign of fibroid multiplication.

Disorders such as those of blood clotting, diabetes, and fistulas among others can also be the cause of a pink bleeding.

This type of bleeding that is unrelated to the reproductive system is almost impossible to deal with without a specialist. One may need to undergo a lot of examinations and tests to arrive at the proper diagnosis.

What does a light pink discharge before period mean? Vaginal discharge is part of every woman’s cycle during their reproductive years.

The mucus-like discharge produced by the cervix helps keep the vagina clean and infection-free. Light pink spotting in most cases is the mixture of the vaginal mucus (whitish in color) and blood (red in color).

Infections of the reproductive organs in most cases cause bleeding after period, irritations and pain. The consistency of the discharge and the smell of the discharge, in this case, will signal you of an infection. Sometimes women experience fever and cramping which are as well signs of infection.

What does it mean a week after?

There should be worry if vaginal discharge that occurs a week after menstruation is accompanied by fatigue, fever, dizziness or other symptoms.

Unless that happens, the pink blood is normal. Most women get stressed when experiencing inter-menstrual bleeding. Here are four common causes of pink spotting a week after your period:

For some reasons, blood from the uterus lining might be retained in your uterus a week later. In this case, the blood which might be light will mix with your vaginal mucus and appear as a light pink discharge. In most instances the light pink discharge will appear 1 week after your period has ended.

Hormonal imbalance can be as a result of many contributing external and internal factors. In case progesterone and estrogen are triggered by such factors, a pink discharge occurs as a result of their imbalance.

These changes and imbalances may be caused by problems such as PCOS. You may experience symptoms such as bleeding between periods, thinning hair or hair loss in women, difficulty getting pregnant and even irregular periods.

An irregular cycle mostly occurs to young women in their teenage hood. During this period sex hormones are not fully regulated.

A slight pink discharge after period is common for years until the sex hormones are well regulated for a normal cycle. Besides that, a woman’s cycle can be disrupted by stress, health conditions or poor nutrition.

A deep penetration might cause a pink discharge even 1 week after your periods. The tiny blood vessels break due to the pressure of the penis against the cervix leading to spotting.

In the case of vigorous sex, vaginal pain is usually the first symptom that occurs even before a pinkish discharge.

Pink discharge instead of a period; not pregnant

Implantation bleeding which signifies conception occurs between the sixth day and the eleventh day after ovulation.

A hormone known as Human Chorionic Gonadotropin (HCG) is usually produced soon after conception. A pregnancy test done immediately after spotting is likely to be negative because the pregnancy hormone is not fully found in the urine. You need to wait until a week is over to get actual pregnancy results.

If the pregnancy results are still negative after implantation has thought to have taken place, you need to visit your doctor. In such a scenario, there could be an underlying course for your discharge. Besides that, you might just be having irregular periods.

You should only worry when the discharge is smelly mucus and causes vaginal inflammation or irritation. Here are the four possible causes of light pink discharge 2 days after your period are:

Sometimes during your period, not all blood tissue is expelled. Some uterine clots or blood clots during menstruation remain. These later mix with vaginal mucus resulting in pink spotting from 2 days after your period is over.

If you are on the regular use of contraceptive pills, then expect a light pink bleeding after your period. This is a common side effect especially in people who start using the pill for the first time.

Contraceptives cause bleeding when the body is trying to adjust to the amount of hormone present in the pills.

Most women get overly stressed as their period approaches. Cortisol, the hormone produced during stress disturbs the regular pattern of sex hormones leading to light spotting 2 days after a period or even amenorrhea (lack of period) in extreme cases.

Due to muscle related defects, a woman’s uterus might lack the ability to contract and expel all the blood. Uterine incapacity is in most cases accompanied by after- period cramps with light pink discharge. Use of pain killers is advised; in case of heavy bleeding visit your doctor for farther management.

A normal vaginal discharge is odorless. There is need to worry when a smelly pink mucus occurs mainly after your periods.

In most instances other symptoms may not be visible. However treating a pink foul smelling discharge depends on finding the underlying cause. In case of a smelly pink discharge as a result of remains of the endometrium, then that resolves on its own mostly after 2 days.

SEE ALSO: How to make your vagina smell good

The first step if you are experiencing an abnormal pink discharge is to visit a gynecologist. A gynecologist will ask a lot of questions related to your menstrual cycle, the color of the discharge and when it all started. Your doctor will examine you and take samples of your discharge to the laboratory if necessary.

Your treatment will depend on the cause of the discharge. Bacterial infections will be treated with antibiotic creams, pills or injections.

Fungal infections will also be treated with fungal creams and oral antifungals. In other cases, your doctor might diagnose a minor infection as the cause of the smelly light pink discharge after menstruation. If that occurs, you might be given vaginal suppositories (Tablets inserted into your vagina to clear infections).

Preventing pink smelly discharge due to an infection

Vaginal infections are common. the vagina is a moist organ, a slight change in its nature leads to infections. Any slight change from the normal whitish discharge, to lets, say green could be a sign of an infection. Here are tips to help you relieve your symptoms, and prevent the infection from spreading further;

In most cases, a pink spotting is no cause for concern. However you have to get worried as soon as you notice a smelly mucus discharge. Here are the three possible complications of a smelly pink discharge

Constant pink spotting has been associated with endometrial cancer of women above 40 years. The discharge might be assumed to be normal until the late stages where an odor is typical. It is always advisable to go for regular cancer screening annually.

The discharge becomes smelly mucus once it takes longer to get out of the body to the vaginal canal. Visit a doctor if you think you are pregnant so that you can rule out ectopic pregnancy.

Most vaginal infections cause bloody discharges. At early stages of infections, other significant symptoms might be absent.

As infections progress inflammations lead to skin erosions and irritations at the vagina.A smelly mucus discharge in most cases is a sign of an infection, simply talk to your doctor about it and get a solution before it gets worse.

Spotting instead of your period is nothing to worry about. You should only pay a lot of attention to when it starts, and look out for any extra symptoms.

If no symptoms are observed, there is nothing wrong with you; you are ok. In some cases though, you will need to call a doctor urgently. Do not hesitate to call your doctor if;

It is never easy to prevent spotting from happening. However determining the cause is usually the key role in eliminating or regulating it.

It is not all cases of spotting that can be controlled by hormonal pills; it is best to visit your doctor to check if there is any underlying cause of your abnormal discharge.