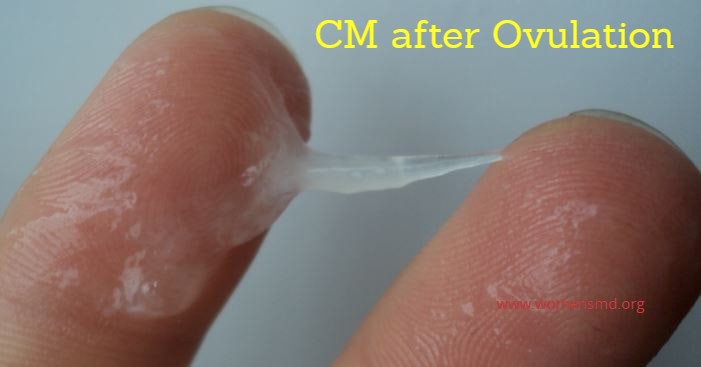 After ovulating, your vaginal secretions can look creamy, egg whitish, thick or even yellow. But what does it mean? What does it look like if pregnant and when should you see a doctor?

Ovulation is one of the major stages in your menstrual cycle in which there are observable signs. You are likely to feel some cramps, see a little discharge among other signs.

What happens during ovulation?

During ovulation, a follicle will burst to release a mature egg into the ovarian cavity. The egg will then start travelling in the fallopian tube towards the uterus.

The ovulation process is under the influence of hormones just like all other reproductive processes. In the first phase of ovulation (called the follicular phase), hormones cause the maturation of the egg in the follicles.

This phase lasts from the time you had your period to the midway of your period.

In the second phase which is the ovulation phase, an increase in the estrogen hormone leads to a rise in the luteinizing hormone (LH) and the follicle stimulating hormone (FSH).

This rise occurs for about 24 to 36 hours (a day to a day and a half). Each of the hormones released has their own purposes.

Ovulation will occur midway of the menstrual cycle. For a regular period of 28 days, you can expect ovulation and its signs to appear any time around the 14th day. It may come earlier or later than this date since bodily processes are rarely accurately estimated.

Monitoring cervical mucus before and after ovulation (DPO) can help you determine when your ovulation will occur. You will be able to know when exactly you are fertile and ready to conceive (get pregnant).

During ovulation vs. 1 day after

You will notice that vaginal or cervical mucus during ovulation will be stretchy and have an egg white consistency.

The egg white mucus here can be compared to a raw egg. This type of mucus is the best for sperm to swim and survive inside the body until they can fertilize the egg.

After the drying up of the mucus and reverting to the normal discharge, you may notice an increase in the mucus with the egg white discharge appearing once more.

This will likely occur about a week after ovulation. It would be a sign of implantation – is the attachment of the fertilized egg onto the walls of the uterus (if fertilization occurred).

Another aspect of importance is that, when carrying out a self-examination of the cervical mucus, you should be careful not to take a wrong reading due some conditions.

When you are sexually aroused, the case is the same as you will have a specific type of cervical mucus different from the rest of the mucus.

Even after two days from the day you had sex, you may still have semen inside the vagina which can be confused for the egg white discharge.

If you factor in all these aspects, your test will be accurate.

After the ovulation process, the cervical mucus will change its color from the egg white to a slightly white and dry for a few days.

Afterwards, it will retain its color but the dried mucus will be washed away and replaced with a fluid in small amounts.

There is a misconception that egg white is white in color. On the contrary, egg white is mildly yellow and mostly clear in color. It only becomes white when the egg is cooked. The consistency of the egg white is what makes it very similar to the cervical mucus seen during ovulation.

What are the changes in CM after conception? When you get pregnant, the egg released by the ovary would meet with a sperm and together they will form an embryo.

CM after ovulation if pregnant will become thick and milky white in color and in higher amounts. It is referred to as leukorrhea and an early sign of a pregnancy.

It will be easy to know if it is a pregnancy or not if you take note of the other signs of pregnancy which include:

You can take a pregnancy test on the day you were expecting your next period.

If you do not get pregnant after the ovulation, your cervical fluid will undergo changes

The changes include drying up to form white dry mucus followed by reverting to the normal clear to slightly white mucus.

What do the colors mean?

The changes you notice in your vaginal mucus before, during and after ovulation in terms of the texture and color carry different meanings as follows:

The creamy cervical mucus you will see is a sign of an incoming ovulation. It is a bit sticky but not a lot. This type of fluid is not good for the fertilization process as they provide poor conditions for the survival and movement of sperms.

Even after ovulation, the creamy secretion will largely prevent getting pregnant. If you intend to get pregnant, don’t get your hopes high when you see this type of vaginal mucus.

The thick and sticky cervical mucus means you are not yet ovulating. In this case, if you plan to get pregnant, it would not be a good time for it.

The consistency of this CM makes it difficult for the sperms to move and survive inside the body. While you may still get pregnant when seeing this type of mucus, chances are low.

The egg white cervical mucus is a sign of ovulation.

Its consistency allows the sperms to survive and easily move towards the ovaries for fertilization. If you intend to get pregnant, this mucus indicates the right time to try to conceive.

The yellow cervical mucus is referred to as leukorrhea. It is a normal part of the body although its amount goes up during a pregnancy. When you see leukorrhea, you are likely pregnant.

Leukorrhea will be present all through your pregnancy. It is a mix of the normal bodily fluids and dead cells and thus has a cleaning role. It also has a mild odor to it which is normal.

The yellow CM should, however, not be accompanied by any symptoms of a disease such as;

Besides the types of cervical mucus post ovulation described above, the other signs that you have ovulated include:

You may see only a few of these signs or none at all. In either case, it is perfectly normal. When the spotting and cramps become too much, see your doctor.

How to check your CM

CM changes with each stage in the menstrual cycle and the body at large. To check your vaginal mucus: