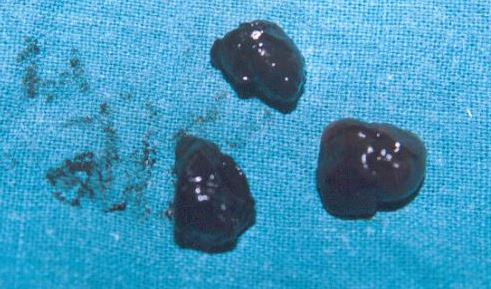 The vagina releases normal secretions to keep it clean and healthy. The color of the discharge ranges from clear to cloudy white or yellowish.

There are times when you may get a black fluid before periods, in early pregnancy, or when on birth control.

The color of the vaginal discharge may vary according to various factors such as the food being consumed, birth control pills being used, the menstrual cycle, and pregnancy.

If it is different from the color spectrum stated, there could be a disease or an infection of some kind. Some of the main causes of the black discharge include the following:

Cervical cancer occurs when cells on the cervix grow out of control. The cervix is located at the upper end of the vagina and it opens into the uterus. When its cells grow out of control, the process of contracting cancer will begin as a dysplasia (precancerous condition).

Slowly, the cancerous cells would grow into full blown cancer if not detected. Early in the developmental stages of this disease, there are usually no symptoms of any kind. The one way one can know if they have cancer in its early stages is the presence of a black discharge accompanied by a foul-smelling odor.

The main cause of cervical cancer is the presence of human papillomavirus (HPV). Other causes include;

However, before you fret about your black vaginal discharge being a sign of cervical cancer developing, you should consider the following reasons and especially the advice of a trained medical practitioner. Other symptoms of cervical cancer include;

LEEP is Loop Electrosurgical Excision Procedure. This is a process that entails using a wire loop that has been heated using an electric current in removing abnormal growths in the lower genital tract. It is one of the ways of diagnosing and treating cancer in women.

In the testing phase, the wire is used to cut out a sample of the genital growth for lab testing. The treatment phase requires cutting off the given genital growth before it grows further. This process is carried out after a Pap test has identified the presence of abnormal cells. The LEEP procedure can also be used to treat or diagnose other cases such as;

The cutting process, although done using an electrical current, is still a cut hence will bleed. The bleeding will not be heavy although it will depend on the size of the cut. While it is an internal bleeding, it can be seen as a black vaginal discharge which can occur at any time including before, during and after periods.

However, you should not make the assumption that having a vaginal discharge is caused by the LEEP procedure. Generally, the risks associated with LEEP include;

The use of birth control pills can also lead to a black or brown vaginal discharge when used for a while. Whatever the amount of the discharge, it is a sure sign that birth control pills are not fully effective on their own and thus need a second method to provide maximum safety from unwanted pregnancies is needed.

Among the reasons why one can experience black or brown discharges include the following;

Always stick to the prescriptions of each drug to ensure maximum effectiveness. Even with that, there are times when the discharge and side effects are visible.

In normal menstruation, the blood should be of a light color to show that one is healthy. However, there are times when the discharge is of a black color or a brown one.

It is not unusual to have a heavy period with a black color. What happens in such cases is that the body releases anticoagulants that prevent the blood from clotting during menstruation. If, however, the amount of the anticoagulant released is not enough to take care of all the blood released, clotting will happen. The blood clots will thus come out with the menstruation.

You should not be concerned as far as the black discharge is concerned when on period. However, there is cause for concern when the menstruation is too heavy since it can cause anemia.

Other issues that may contribute to blood clots in menstruation include;

Having an abortion may also be the reason why some women will see a dark discharge from their vagina. While abortion procedures are quite safe nowadays, the process of healing is still the same.

When a women has an abortion whether by surgery, emergency contraception or Plan B, they will have the gestational sac completely removed from their body.

However, the decidua is not removed in totality. This tissue will take several weeks or even months to come out on its own.

And it comes out as a black or brown fluid similar to the one seen after childbirth.

Medically, this kind of discharge, which is made up of placental tissues, mucus and old blood is known as Lochia. The average period for experiencing Lochia is between 4 to 6 weeks after the abortion. To better understand Lochia, here are its three stages;

If you went for an abortion and see the three stages of the vaginal discharge in the order given above, there is nothing to fear. As long as you are taking the medication prescribed by the doctor, you are on the safe side. However, if you experience any of the following, see your doctor as soon as you can;

Our bodies have been made to naturally respond to foreign bodies by rejecting them. It is the same reason why organ transplants only work between compatible people.

If you are experiencing a black discharge from your vagina with a foul smell, then chances are that you could be having a foreign body inside you.

Those who use tampons are at a high risk of lost or stuck tampons. If you forgot to remove a tampon and it has led to a black discharge, you will likely need the help of a doctor to remove it and get rid of the black discharge. The matter may get complicated if the vaginal discharge is accompanied with fever or the toxic shock syndrome.

Always make sure you remember to remove the tampons you use or any other foreign bodies you insert in the vagina either for medical or other purposes.

Implantation occurs between 6 and 12 days following the fertilization of the egg. For those on their second or subsequent pregnancies, this is the first sign of pregnancy. The process involves the fertilized egg attaching itself to the walls of the uterus. It also involves some burrowing by the egg with the result of some bleeding.

Most women will experience very little bleeding but even this small amount of bleeding will often turn black or red in color. The normal color of the implantation bleeding is pink. However, when the blood takes a while to go out of the body, it will appear dark brown or dark in color. Unless there are other complications, this is perfectly normal.

Rather than seeing your menses, or days before your periods are due, you may see a black or brown fluid. There are several reasons as to why this may happen including the following:

At the end of the period, there can also be traces of brown or black discharges from the vagina. This is a normal condition that should not worry you since it is simply old blood which has taken longer than usual to come out.

Also, the case may be that old period blood will stay long enough to mix with normal discharges turning them to a brown or black in color. If this occurs shortly after the period, it is normal. However, if it occurs a few days afterwards, it could be something different. Consult your doctor about this.

The black fluid can also occur during pregnancy due to several reasons. Among them are;

When should you see a doctor? While some black discharges are normal, it is not encouraged to have them on a frequent basis. The best way to keep them at bay would be to take some measures which are basically parts of healthy living.

Combine regular exercise with the right amounts and types of food to stay healthy. Working out should be done at least thrice a week. The food to be eaten should be packed with enough calcium and magnesium and includes foods such as;

However, even with these activities and diets, do not expect to fully get rid of occasional appearances of black discharges from the vagina. It all depends on the condition of the individual as far as their health is concerned.