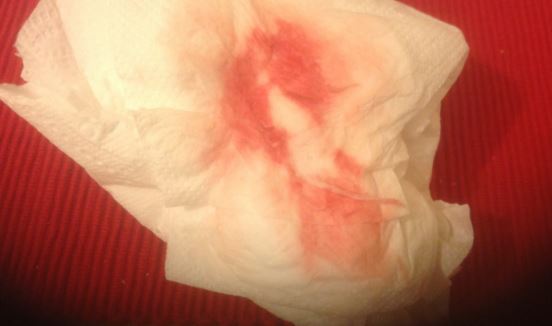 Spotting between your periods might scare you especially when it happens for the first time. This kind of spotting is quite normal with women on hormonal birth control.

Studies show that at least 45 percent of women on the pill and IUD experience spotting for years, at least twice in three menstrual cycles. This kind of spotting is called breakthrough bleeding.

What is Breakthrough bleeding?

BTB is any form of bleeding that happens between your menstrual periods. It is also known as inter-menstrual bleeding. In most cases, it means you are on a hormonal contraceptive and are getting this as a side effect.

There are many causes but most women relate it to stress and the use of hormonal contraceptive pill especially those with estrogen.

A blood-tinged discharge between periods does not look like the normal menstrual period. It is usually lighter than your normal period. Spotting might appear dark brown or pink. The flow is minimal, and might not soak a pad or tampon. This usually occurs mid-cycle or during ovulation.

It does not last more than three days, but if it does you may need to visit your doctor to determine the cause. Spotting may go on for years when a woman approaches menopause. This is considered normal.

Here’s a picture that illustrates how it looks like.

Most of the times, bleeding between your periods is a minor inconvenience. In other times it might be a sign of a serious health problem

Most women have regular monthly periods. It is alarming when a bloody vaginal flow occurs outside the anticipated time of the month.

There are several causes. Here are some of the reason:

Research shows that one out of five women uses some form of birth control. Spotting is a common side effect if you happen to start, switch or stop any form of contraceptive.

Estrogen sustains the uterine endometrial lining. Changing or messing up with reproductive hormone levels in most instances leads to shedding of the uterine lining. This type of spotting lasts for 1-3 days and is usually a light flow.

Hormones contained in the IUDs are slowly released disrupting the normal levels in the body leading to bleeding for days between periods.

It is common to experience spotting in the first six months after IUD insertion. Heavy spotting is not common, but if it occurs seek medical advice as soon as possible. The problem should go away on its own over time though.

Most women experience spotting during ovulation. Estrogen drops in levels when an egg is released from the ovary. This usually occurs from the tenth day to the fourteenth day after your period.

In most cases decline in estrogen causes women to experience slight blood spots accompanied by pain or cramping in the abdomen.

Is spotting normal in early pregnancy? A possible reason for breakthrough bleeding between your period is implantation. If bleeding occurs and your period is not due in a few weeks, chances are it is a sign you are pregnant.

Implantation bleeding occurs before your period, usually, five to ten days after conception has occurred.

Polycystic Ovary Syndrome is caused by hormonal imbalance. This condition interferes with the normal ovulation. It can therefore often lead to inter-menstrual bleeding.

PCOS usually occurs when the ovaries fail to receive the right hormonal signals from the pituitary gland. Altered signals can lead to irregular menstruation or simply spotting that does not follow any particular pattern.

Also known as myomas, uterine fibroids are noncancerous growths that might occur in the uterus during a woman’s reproductive period.

They are harmless for years during the early stages of their growth. However, they enlarge with time, disrupting the shape of the uterus itself.

Cervicitis is an inflammation or irritation of the cervix. Its symptoms include a pale yellow vaginal discharge, itching, pain during intercourse and spotting.

According to Patient.info, BTB and postcoital bleeding are commonly observed in cervicitis patients.

Cervicitis may be caused by other non-infectious factors such as trauma, douching, and exposure to chemicals. It can be treated within two weeks.

Research shows that the most common cause of cervicitis is STIs. It is therefore advisable that you use a condom during sex with a new partner or simply stay faithful to one partner.

Ectopic pregnancy (tubal pregnancy) is a complication which usually occurs as a result of an embryo attaching itself to the fallopian tubes or anywhere other than the uterus. In tubal pregnancy implantation usually, occurs in the tubes that carry the fertilized egg to the uterus. Chances of normal pregnancy are nil.

The pressure of the growing mass is exerted on the tubes, eventually causes rapture hence bleeding before period.

There are no signs or symptoms in early stages of ectopic pregnancy if, any case the symptoms which usually occur are those of pregnancy. The first signs after some time are usually pelvic pain, spotting, and nausea.

Most common causes of this pregnancy include inflammation, infection, smoking, and contraceptive use. You are immediately advised to visit your doctor as soon as you experience related symptoms.

Signs and symptoms include the following:

Around 30 percent of women experience spotting in early pregnancy. Spotting, in this case, is as a result of implantation.

According to Belly Belly, some women experience a breakthrough period in early pregnancy at the time when their menses would be due. This translates to around 4 weeks, 8 weeks and 12 weeks of pregnancy. This intermenstrual period may be accompanied by cramping, backache, and mood swings.

Vaginal bleeding after a month or three weeks of gestation means a serious underlying problem. It is always advised that you visit your doctor immediately to rule out a miscarriage or any medical problem.

Other common causes of vaginal bleeding that might be life-threatening during pregnancy include:

Is it possible to have a period without ovulating? Menstruation which is a periodic event is controlled by hormones (estrogen and progesterone).

Without the normal hormonal functioning, ovulation does not occur, that disrupts the normal monthly pattern. On a normal cycle, estrogen is released, which helps build up the endometrium in case fertilization takes place.

In this case, the mid-cycle flow is usually as a result of uncontrolled estrogen, which in most, if not all cases, leads to heavy spotting.

Since bleeding can occur without ovulation, it advised that women use birth control pills to prevent conception. Ovulation is sometimes unpredictable and that makes timing almost impossible. It only makes sense to stay protected.

When on the pill

Am experiencing bleeding while on the pill, could I be pregnant? Unless you stop taking your pills, it is unlikely that you are pregnant. The pills regulate your hormones to prevent conception.

There is only a small chance that you would get pregnant while on the pill. The best way to rule out pregnancy is to have a pregnancy test and watch out for other signs such as nausea, vomiting, breast tenderness, constipation, and diarrhea.

Spotting after years on birth control pills could be as a result of extended dosage of progesterone-only pills. Additionally, even after years on the pill, you are likely to bleed when you miss a pill.

Other factors such as diarrhea and vomiting might tamper with pill absorption causing breakthrough bleeding. If heavy spotting occurs even after three months contact a health care provider or gynecologist immediately.

How long does it last?

You cannot tell when the breakthrough spotting will stop. Its duration majorly depends on its cause. Implantation blood as a result of pregnancy usually takes 2-3 days, while bleeding as a result of contraceptive use may last about some hours to months.

Every woman’s body functions differently, however heavy spotting between periods, in any case, calls for a doctor’s examination.

Bleeding while pregnant might cause a miscarriage, therefore you are advised to visit your doctor immediately once you notice a pink or brown discharge that lasts long.

Is it breakthrough bleeding or period? How do you tell the difference?

Breakthrough discharge should not be confused with a period. Spotting is often not anything to worry you unless it occurs for a longer duration or turns into a heavy flow. You are likely to experience light bleeding than your typical period.

Your period is a normal occurrence at the end of each cycle, while spotting occurs as a result of the following factors:

Call your doctor when the spotting gets heavier or when heavily bleeding in pregnancy.

Normal spotting is usually light and lasts for an average of two days. Heavy mid-cycle bleeding is in most cases caused by contraception.

It may occur when you first start on birth control pills, hormonal IUDs patches, shots, and implants.

When it goes on for years, it poses a significant health risk. It is therefore recommended that you inform your doctor to help you get the right contraceptive for you.

A tubal pregnancy is another cause of such symptoms. It occurs when vessel rupture occurs. This is life-threatening and a health risk for any woman.

A heavy flow is an immediate cause for an alarm. You should instantly inform your doctor when:

Your doctor will take your history related to the bleeding, duration, and amount. You will be examined for various conditions and also get tested for pregnancy and STIs, to help determine the cause of the bleeding.

How to stop the bleeding

Breakthrough discharge is common when on Nuvaring or Aviane. One major side effect of such contraceptives is spotting or light bloody discharge between periods. Here is how to stop such spotting fast or immediately.

1 Do not stop taking your pills abruptly

Stopping your pill intake might not solve heavy spotting as many women think. Bleeding becomes worse when the pill is suddenly discontinued.

Note that it might take up to six months for the body to adjust to this contraceptive.

Irregular intake of pills is one of the reasons for your intermenstrual symptoms. Setting a reminder on your phone or an alarm on your clock is a sure way to ensure that you can take your pills regularly.

Skipping 1 to 4 pills can make you start bleeding. The pills are packaged in a designed pack to help you stay on track. Each day is labeled hence it will be easier for you to know once you have skipped a pill.

If for instance, you take the pills out of their original pack, you are likely to forget a dose which might increase chances of heavy spotting. Try not to remove the pills from their pharmacy packaging.

Stress is inevitable but controlling it isn’t. Stress hormone called cortisol greatly affects reproductive cycle hormones which might lead to a bloody vaginal discharge between periods.

Activities such as exercising, reading and walking can help you relax resulting stress relief.

Sudden weight gain or loss will majorly cause hormonal imbalance. Keeping a healthy weight will help keep your hormones balanced.

Can you stop a breakthrough period immediately when it occurs? While using the pill, spotting is not a sign of an underlying disease it simply means that your body is trying to adjust to some hormones it is loaded with.

Do not stop using the pill. It will only make it worse. Here are four ways you can to stop the bleeding fast, almost immediately:

Spotting is common with injectable contraceptives such as Depo-Provera. Here is how to stop bleeding when on Depo-Provera, choose any of the three remedies below to help you get relief fast.

It is, however, crucial that you talk to your doctor first before taking any drug. Your doctor might prescribe the same medications with other instructions.